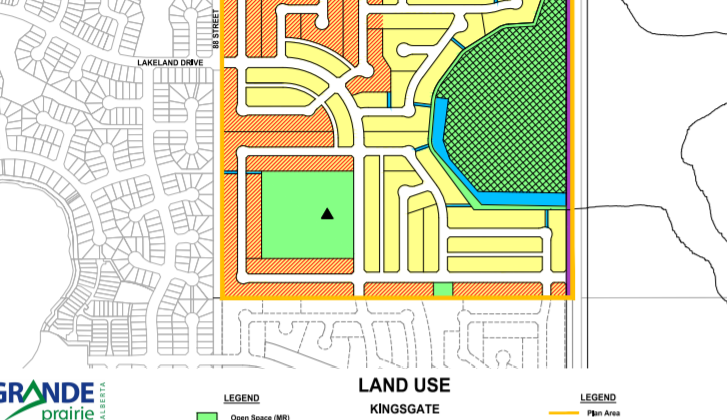 A large wetland area in the Kingsgate Landing neighbourhood in Grande Prairie is no longer slated to become residential properties. At a Grande Prairie city council meeting on January 13th, council members approved the developer’s request to change the neighbourhood’s outline plan to keep the wetland intact.

The initial plan for the development located next to Crystal Lake Estates and the Lakeland neighbourhood was adopted in 2008. It dictated that the wetland would have been covered over to make more room for houses.

Scott Roessler with Helix Engineering was at the meeting on behalf of the developer and says that plan has changed now that the province has changed its rules on conserving wetlands.

“We will be conserving all of the major natural wetland on the property,” he explains. “There are some smaller wetlands throughout the property that are very hard to develop around so we’ll kind of maintain what we can.”

Council also approved plans to eliminate multi-family homes in the neighbourhood, which will bring the future population down by 347 people. Rossler says the developer also wants to drop lot sizes from 40 to 36 feet.

“We don’t generally see much difference in housing style or type with that; it just provides a little bit more of an affordable lot to the purchasers.”

Roessler adds that the developer of Kingsgate Landing hopes to start work this year.

At Monday’s meeting, changes were also made to the outline plan for future development of the Copperwood subdivision east and northeast of Crystal Lake Estates and Crystal Heights. They include changing the location of collector roads and taking out connections between neighbourhoods.