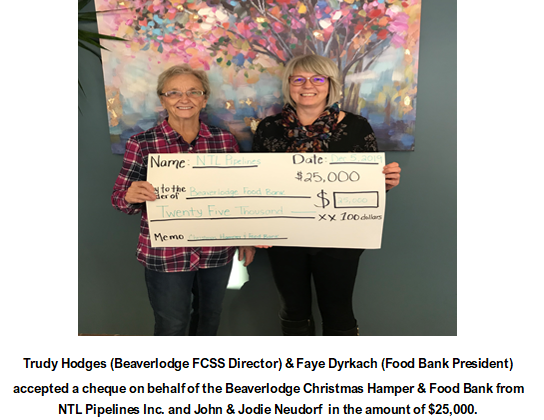 The cheque presented to the Beaverlodge Christmas Hamper and Foodbank Program (Supplied, Facebook)

Staff at the Town of Beaverlodge got the surprise of a lifetime recently, as NTL Pipelines handed over a $25,000 cheque to help out its Christmas Hamper and Food Bank programs.

Director of Beaverlodge Family & Community Support Services Trudy Hodges says the deliverer of the gift didn’t want any spotlight; they just wanted to lend a hand.

“He didn’t want a picture taken; he wanted this to go to the food bank,” she says. “Our whole office was just like, ‘wow’! Everybody was in tears and it was just crazy.”

It’s not the first time this year that NTL Pipelines has made a splash. The company has also delivered two donations to the Sexsmith & Area Christmas Hamper Program for a total of $25,000. Hodges says she reached out to her Sexsmith counterpart when they received the cheque.

“I phoned her and said you won’t believe this, but the same NTL Pipelines that gave you money gave us money. It is so generous, and it’s such a great time for both of us to get that money and to put it towards the Christmas season, and it will go a long way throughout the year.”

Hodges says they currently have 55 Christmas hampers ready for delivery over the holiday season, adding if any money remains after they stock the shelves, they may look at using some funding towards upgrading the recently installed community garden in the springtime.