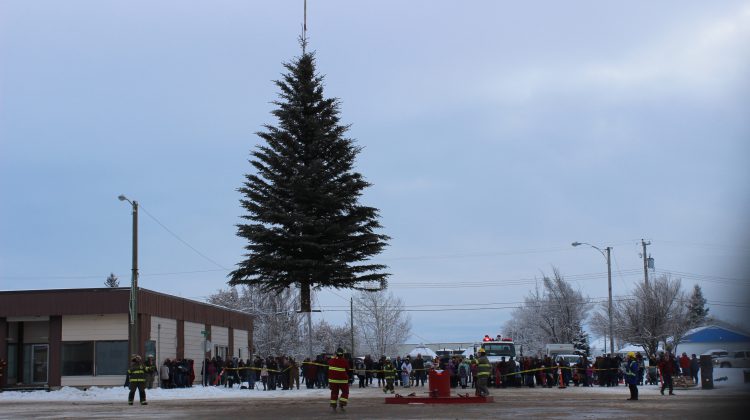 The 32-foot Christmas tree that was dropped at intersection of 100 Street and 101 Avenue in Hythe last year, Emma Mason

Another Christmas tree has made landfall in the middle of the main intersection in Hythe. On Saturday afternoon, the tree made the 20 minute trip by helicopter and was dropped in the centre of the Village.

This is the second time in 30 years a tree has been dropped in Hythe. Mayor Brian Peterson says this year’s drop actually went smoother than last year.

“We’re getting better. If you were there last year you would have seen us try about 10 or 12 times to hit our tree stand. This year, first try.”

This year’s tree was donated by the Hanson Family and stands at 37’4″, larger than last year’s 32′ tree. Peterson says the tree has quite the history.

“The tree was planted in 1991 and as we went by we found out that it’s an experienced Christmas tree because there were lights in it from its previous life as a Christmas tree.”

Lights were put on the tree prior to the flight and then after it reached its final destination, volunteers and community members helped decorate it. Peterson says he hopes this is a tradition he can continue for years to come.