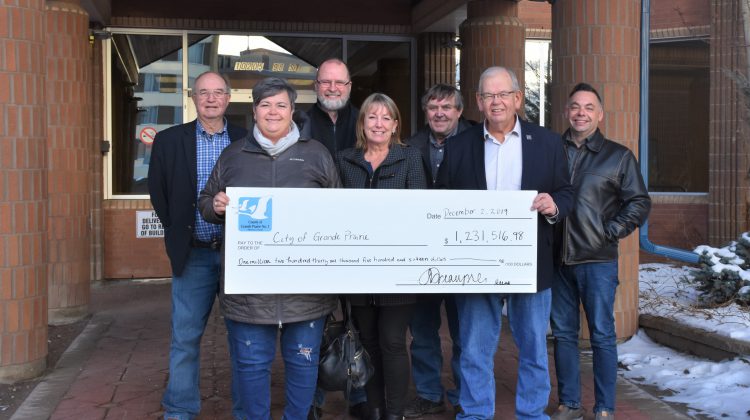 A meeting between Grande Prairie City Council and County of Grande Prairie council members didn’t go the way County council wanted. At Monday’s city council meeting, Reeve Leanne Beaupre attempted to present a ceremonial check to the city for money owed through their revenue-sharing agreement but was denied.

Council chambers were tense as Beaupre asked for a photo to be taken with both sets of councillors, but Mayor Bill Given told her they would not take a ceremonial photo during a business meeting. Beaupre and county council then left, choosing to take their own photo outside of city hall.

In a Facebook post after first half of the meeting, Councillor Dylan Bressey called the entire exchange “unusual” and “offputting”.

“No real cheque was offered today. We were told to expect payment sometime later this month. Instead, there was a request made for the City to take a photo op with a large, ceremonial cheque. We were not able to accommodate this request due to being in the middle of a business meeting.”

“Cheque presentations are used to recognize contributions to public facilities, non-profit programs, and other community enhancements. But the money owed by the County is essentially a utility bill,” he added.

The agreement has been in place between the two municipalities since 2003. It requires the county to give the city 10 per cent of the tax revenue it receives from new non-residential development that accesses Aquatera services. According to the city, the payment was due in September.

The county disagreed saying that “the annual contribution reflects the use of City facilities by County residents.” Reeve Leanne Beaupre says she was not happy with the way the meeting went down.

“I don’t presume to know why the line of questioning I just know we’re happy to be able to contribute as per our agreement and we will continue working along towards that end,” she adds.