Marchers speak out against family violence 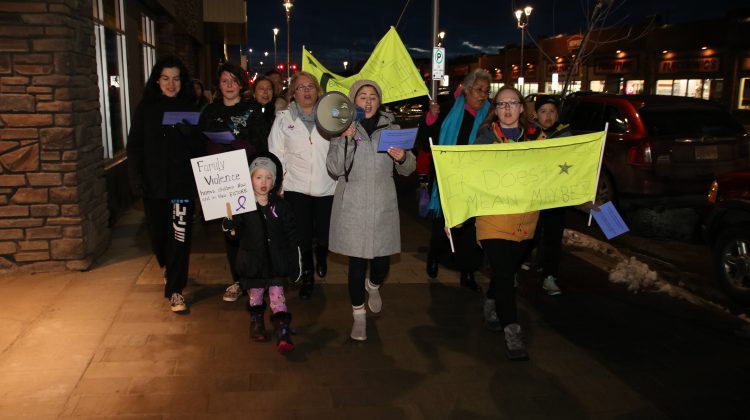 A group of roughly 40 people marched through downtown Grande Prairie as part of the annual Take Back the Night event on Friday, November 1, 2019 (Erica Fisher, MyGrandePrairieNow.com staff)

“Whatever we wear, wherever we go, yes means yes and no means no!”

That and other chants could be heard as the Take Back the Night march made its way through downtown Grande Prairie. Roughly 40 people took part in the annual event aimed at ending all forms of family violence.

Marchers took a loop around the downtown core, starting and ending at Revolution Place, where November was proclaimed Family Violence Prevention Month by Grande Prairie City Councillor Chris Thiessen on the ice before the Grande Prairie Storm game. Elder Loretta Parenteau-English led the group in prayer before they began, and brought two of her 11-year-old grandsons with her.

“So they’ll understand that this isn’t a path to go on; that we all work together to make positive changes in the future. Especially, them seeing something like this, that people are out there and people can make changes.”

Brandy Pilon is a member of the Prevention of Family Violence Network leadership team, which is a group of service providers committed to preventing family violence in northwestern Alberta. She hopes the event raises awareness of the issue of family violence both in Grande Prairie and society as a whole.

“It’s still occurring in our community; it’s still an issue that we want to work together to solve. It’s okay to talk about and there’s places to go to receive supports for that.”

According to pamphlets handed out to people at the arena, Grande Prairie & District Victim Services opened up 1,544 files related to domestic violence in the last year, and Grande Prairie RCMP reports 1,755 calls to service related to intimate partner violence.

“We have to stop the silence; we have to break the secrets, and the only way we can do that is… to make sure that people are fully aware of it and it’s okay to talk about it.”

In addition to victim services, Odyssey House, and the RCMP, there are resources available to address family violence through the John Howard Society, the Caribou Centre, and the Pace Community Support, Sexual Assault, & Trauma Centre. Other events slated for this month include Go Purple Social Media Day on November 22nd and Breakfast with the Guys and Conversation with the Guys on November 27th.