Construction on new Composite High School to begin this month 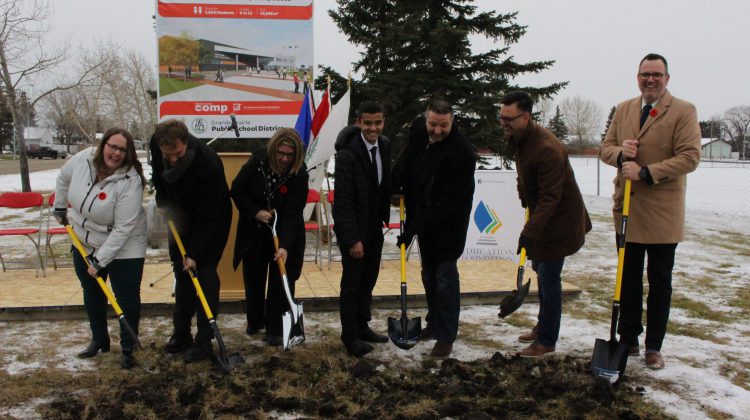 Sod has officially been turned at the site for the new Grande Prairie Composite High School. Grande Prairie Public School Division Superintendent Sandy McDonald says it has been a long time coming, but they are thrilled to be able to see the start of major movement on the project.

“Delays happen when you’re working with projects of this sort of scale, but for this to be starting is just thrilling for the school division, and for the staff and students across the street at the existing school.”

Slated to be built across the street from the current Comp, McDonald says it was vital for many in the planning process to keep the school in the neighbourhood.

“That was really important for our board of trustees to take the Grande Prairie Composite High School and just move it across the street. To keep that long, storied history going is very important.” Sandy McDonald

Mayor Bill Given echoes those sentiments, saying it’s less about the flashy new school and more about the continuation of the legacy and education which began with the original Composite High School back in 1964.

“I was a Comp Tomahawk on that basketball court so I spent many, many hours in that gym, and really many of my lasting friendships that exist to this day were formed on that court. These kinds of public facilities are really places where memories are made and that’s bigger than all the concrete and glass that will go into the building.”

Construction on the new school is expected to begin within the next month, with the current one likely to get demolished eventually. The first day of classes at the new Grande Prairie Composite High School is slated for September 2022, with an expected first-day population of about 1,400 students.