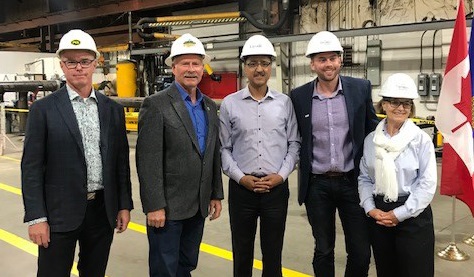 The provincial government has given Terrapin Geothermics the ability to start testing on and around the location of its new power plant south of Grande Prairie.

Following the August announcement of the Greenview Geothermal Power Project in the Gold Creek area, Terrapin Geothermics has been given the right to conduct testing and explore the geothermal potential in the MD of Greenview.

A release says this approval will allow the company to begin seeking regulatory approvals for its geothermal power project and that they are one step closer to operating test wells within the MD.

The facility will be the first of its kind in the province and is a joint project between the MD, Terrapin Geothermics and PCL Construction.

The cost of the project is sitting in the $50 million range with it partially being funded by a $25.4 million grant from Natural Resources Canada.

Work on the new facility is expected to take about three years to complete. Once the facility is built, it is hoped it will generate five megawatts of electricity annually and reduce greenhouse gas emissions by approximately 20,000 tonnes per year.