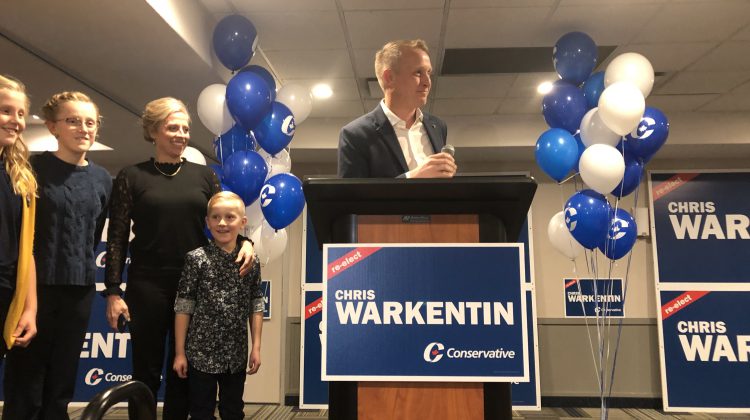 Conservative Party of Canada candidate Chris Warkentin has been projected to win the right to represent Grande Prairie – MacKenzie for the fifth time. With 46 of 233 reporting, the incumbent Member of Parliament has received 7,087 votes, or about 82 per cent of the total vote.

Warkentin says he continues to take nothing for granted and believes the mandate from voters in Grande Prairie – Mackenzie is clear.

“It’s an honour for me to have this endorsement, and it’s been a privilege to serve over the last 14 years. My number one goal and number one responsibility has always been to serve the people living in the Peace Country and I will continue to undertake that responsibility.”

He adds that with the projected Liberal Party of Canada minority government, the fight will continue for Conservatives in Ottawa.

“I am concerned about the prospect of a Liberal minority supported by an NDP party. Between the two parties, they have a propensity to higher taxes and uncontrollable spending; obviously, we believe there need to be constraints on both of those fronts. We’ll continue to hold those parties to account; I believe that’s what my constituents would expect and I will continue to do that.”

Back in the 2015 election, Warkentin walked away with 72.91 percent of the vote. Official totals are expected to be tabulated and released by Elections Canada Tuesday.

The remaining candidates, as of 9 p.m., have vote totals as follow: