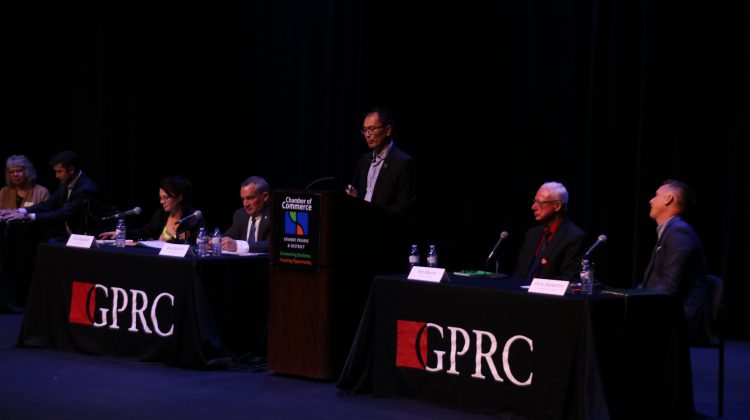 People in the Grande Prairie – Mackenzie riding should have a better idea of who’s in the running to represent them in parliament. Four out of five candidates running in the federal election took part in an all-candidates forum put on by the Grande Prairie & District Chamber of Commerce Thursday night.

The candidates fielded questions posed by both the chamber and members of the audience, with topics ranging from addressing the opioid crisis and affordable housing, to supporting Canadian agriculture and sustainable infrastructure. When it came to whether they prioritize balancing the federal budget, the People’s Party of Canada and New Democrat candidates had vastly different responses.

“Deficits are nothing more than deferred taxes on our children and grandchildren. What we will do is balance the budget in two years,” Burchill retorted, mentioning eliminating corporate welfare foreign development aid as methods.

Discussions about climate change and the energy industry also permeated the evening. While Burchill repeatedly argued that there’s no scientific basis that an increase in CO2 has been caused by humans, his counterparts from the Liberal and Conservative parties maintained that Canadians can be both concerned about the environment and the energy sector.

“We have to balance,” remarked Munro, nodding to Trans Mountain pipeline expansion. “It’s taken a long time because we have to consult with the Indigenous population… that doesn’t mean that any one group has a veto, but you have to balance between the need to develop our energy sources… with the environment.”

“I believe that supporting Canada’s energy sector is really the solution to reducing greenhouse gas emissions,” added Warkentin. “I believe that displacing other forms of energy that emit more GHG emissions in places like India and China, we can get LNG there to displace coal-generated power. That’ll reduce global emissions.”

The full forum can be viewed via Facebook Live. Canadians head to the polls on October 21st.