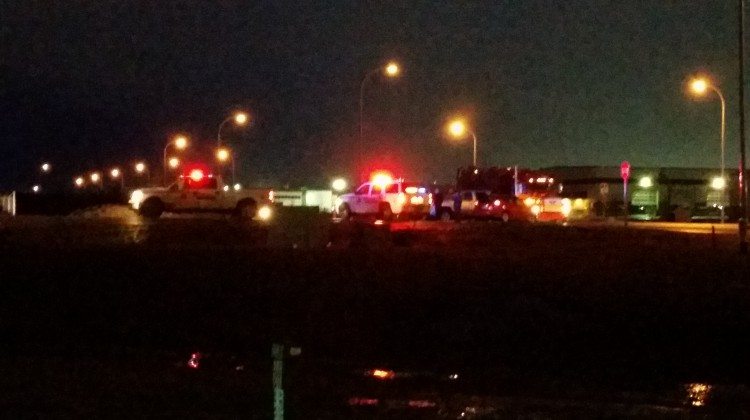 RCMP respond to the shooting at the Clairmont Industrial Park on March 31, 2015, Erica Fisher

A former employee of Halliburton has been sentenced to five years in jail after a 2015 shooting at its Clairmont facility.

Police were called to the Clairmont Industrial Park shortly before 8 p.m. on March 31, 2015 after receiving a report that a man was shooting a rifle on the Halliburton site. According to an agreed statement of facts, then 58-year-old Michalakakos drank on the night of the shooting and drove to the facility with two guns, which were both prohibited weapons, as well as ammunition.

Michalakakos had been fired from his job in October 2014 and began drinking heavily. He eventually lost his home.

The night of the shooting, two witnesses say they saw the suspect shoot into the air before firing 10 shots above one of their heads. He also fired shots over the heads of security officers.

Michalakakos later entered the building and called a former co-worker, who drove to the scene and handed his phone over to RCMP. Officers talked to Michalakakos directly and were able to get him to come outside to be arrested. No shots were fired by officers, and no injuries were reported.

The five year sentence was handed down for the pointing a firearm charge, and the sentences for the rest of the charges will be served at the same time. Michalakakos was given 34 months credit for time served, meaning he has 26 months left on his sentence.

He also received a lifetime weapons prohibition and was ordered to provide his DNA to the national DNA databank.