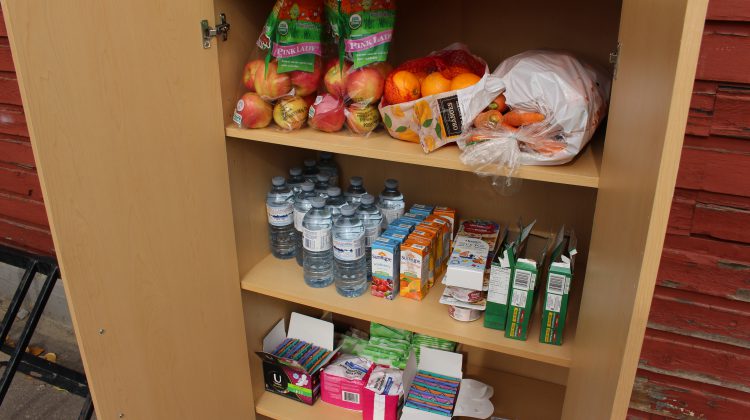 Staff at the Grande Prairie Farmers’ Market believe that no one should have to dig through a dumpster to find their next meal. Because of that, they have started a free food program called Ronnie’s Cupboard to provide a little extra for people in need.

Manager Darice Rach says the project was started and named in honour of a young girl they recently found looking through the dumpster behind the market.

“We were just going to leave a bag of food with her name on it by the dumpster every day and then it just seemed wrong. Everybody is entitled to food and it shouldn’t be out of a dumpster by a dumpster. This was a way of keeping people out of our dumpster but still giving them something to eat.”

The cupboard is located outside of the farmers market and is stocked twice a day with foods like granola bars and fruit and water as well as feminine hygiene products.

It has only been in place for a week but already Rach says they have had so many people come and visit it.

“I think we just thought it would be like people coming up to the cupboard here or there and I mean it’s not. We have had a large amount of people trying to find out where it is, how do they access it, what’s in it so it’s been a lot bigger than we thought it would be.”

Members of the farmers’ market donate a lot of the food for the cupboard but Rach says they are also looking for donations from the community as well. Items can be dropped off at the market’s office or at Off the Wheaten Path in the food court.