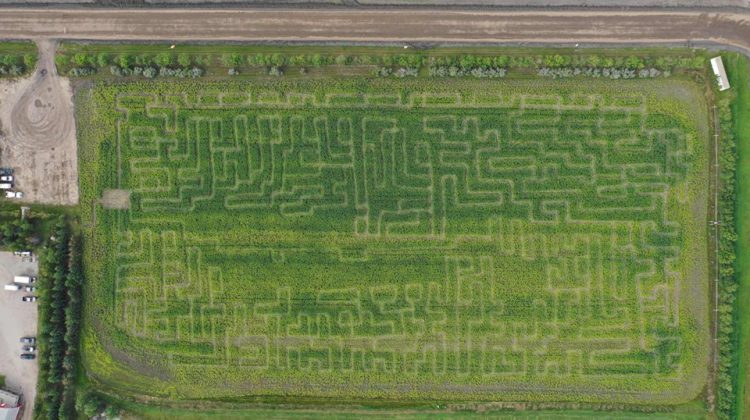 Due to wet weather, Halwa says they weren't able to cut their usual designs into the corn this year (supplied by Grande Prairie Corn Maze, Facebook)

A local attraction will have a shortened season this year due to Mother Nature. Country Roads RV Park Manager Jason Halwa says the Grande Prairie Corn Maze has faced another year of wet, uncooperative weather but is open.

“Every time we turn around to get some stuff done it was raining and then it takes time to get out there to dry up. We never got the design in that we wanted to this year again but we were able to go out and make some pathways and try and salvage what we could of the season.”

The corn maze never opened at all in 2018 because of rain much to the disappointment of residents. Back then Halwa said in more than 10 years of running the maze they had never lost a season until then.

This year, the maze officially opened on September 7th but closed the next day due to rain. It reopened on the 12th and has been able to stay that way ever since. Despite the weather delays and unusual schedule, Halwa says people are still visiting the attraction.

“People have been chomping at the bit for us to get open. Missing it last year, it’s no fun for anybody. Even though some corn is tall, some is short everybody still has a lot of fun out here.”

If Mother Nature cooperates, Halwa says he would like to see the maze stay open until mid-October. Daily updates on whether the maze will be open, as well as operating hours, can be found on the maze’s Facebook page.