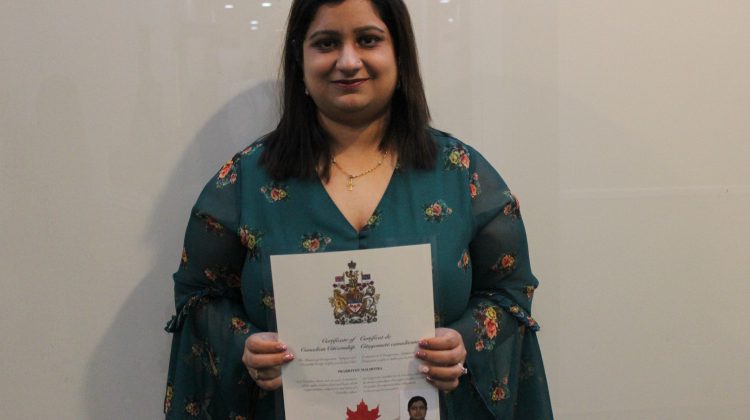 A Grande Prairie woman’s 11-year journey to becoming a Canadian citizen is over. On Thursday morning, Prabhjyot Malhotra, and more than 100 other residents were sworn in as Canadian citizens in a mass ceremony.

Malhotra first came to Canada from India in 2008 and says her journey to getting her citizenship was not always an easy one.

“I would say [I dealt with] criticism and racism. It was tough but I met a lot of good people here, especially Canadians, that helped me with the smooth flow of my journey.”

“I can see the difference between India and Canada and I am glad that I chose Canada as my new home,” she adds.

In order to become a Canadian citizen, an applicant must have lived in Canada for at least three years before filing an application. After the application has been filed it can take up to a year to be processed. After that, applicants must do a citizenship test and attend a ceremony where they will get their official certificate.

Malhotra celebrated the occasion with her husband, who is also from India and who got his citizenship in 2018, and their daughter. She says she can’t imagine a better place to raise her family then in Grande Prairie.

“It’s a small community, not as big as Toronto where originally I came to. I get a lot of family time here after work; Grande Prairie’s not that big and not that small so it’s perfect for our little family.”

Almost 400 new Canadian citizens were welcomed to the Grande Prairie area at three ceremonies on September 11th and 12th.