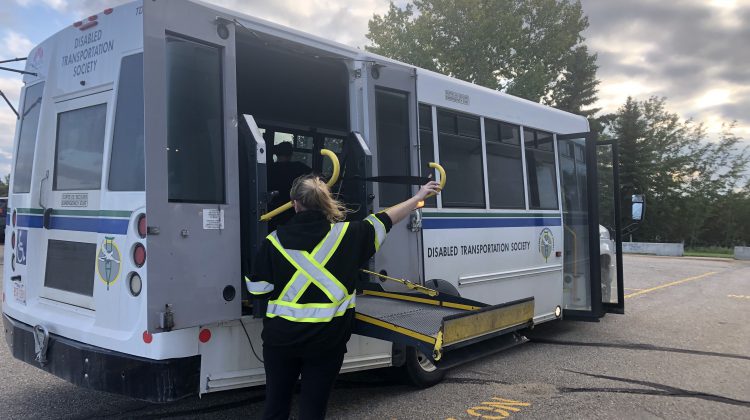 A Disabled Transportation Society Bus arrives at a special meeting of the board on September 10th, 2019 (Michael Lumsden, mygrandeprairienow.com staff)

Disabled Transportation Society board members were hoping to get a yes or no vote on whether or not to dissolve, but a lack of attendance scuttled that idea.

Board Chair Barry Menard says the vote planned for Tuesday night’s special board meeting was symbolic, as they no longer have any employees to govern.

“One way or the other it really is going to be a defunct board. It brings the end to an institution, a 40 year plus institution that we no longer have in our community which served the community well.”

Menard says it has been a tough go in recent months, as financial troubles and the beginning of the transition to city ownership at points made the relationship contentious. However, he remains hopeful that the people who matter most, the users, continue to get the service needed.

“I’m cautiously optimistic just with the dealings we’ve had with the city over the past two and half years I’m somewhat jaded, very jaded.”

The most recent troubles for the Disabled Transportation Society began in the spring, however, as the City of Grande Prairie began funding the day to day operations on a month to month basis in May. City council announced in July that they would be taking over full ownership of the operation as of September 1st.

Mayor Bill Given admits it has been a difficult time for members of both city council and the still formed DTS board, but says he is confident the future of the service will be taken care of with user needs top of mind.

“We have an organization of approximately 800 professionals that are focused on that day in and day out, and I have to believe that the resources we can bring to bear on accessible transit will ultimately lead to better service for the users.”

Given adds as of today, no users will have to change with how they interface with the service, as the city will continue to provide information and updates through the channels which are already in place.