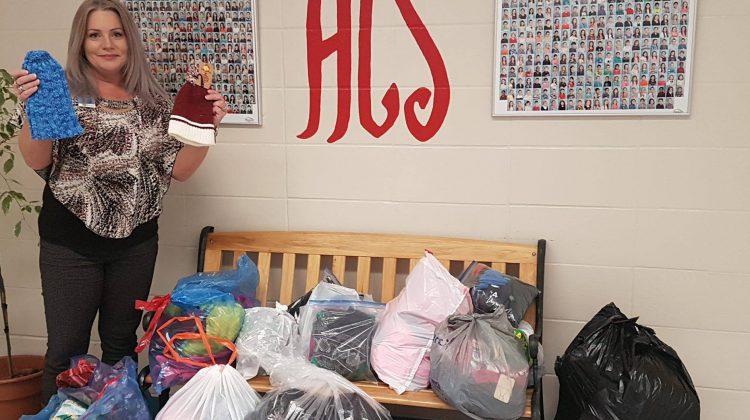 A local woman is trying to make sure no child goes without warm clothes this winter. Over the last few years and again this year,  Charlene Johnson will be collecting items for Hillside School’s Hanger Program which provides clothing items to students in need.

Johnson first got the idea to help out four years ago while working at the school with the Junior ATB banking program. While visiting one day she says she saw a little girl who wasn’t able to go outside for recess because she didn’t have winter boots.

“When I realized that they weren’t allowed to go outside because of the cold weather and they didn’t have the appropriate attire I just thought kids need to go outside and play. From there it snowballed.”

Johnson starts collecting clothing items like hats, mitts and boots around the end of August each year. She uses her lunch breaks, time off and weekends to collect donations. She says the number of donations she collects has been growing from year to year.

“It started I think with two truckloads and last year I think I ended up dropping off close to eight full truckloads of donated clothing, shoes and boots.”

Johnson says because the community has stepped up and helped donate so much, Hillside School has also opened the hanger program to students in need at Swanavon and Avondale Schools as well.

“If the kids are coming to school improperly dressed there might be a reason at home such as no money to go out and by items so why not have this place where they can go and shop free of charge without judgement. Anybody and everybody in the school can go there and shop and no money is required.”

Donations of coats, hats, scarves, mittens, boots, socks and brand new underwear can be dropped off at the ATB Entrepreneur Centre on 106A Street.