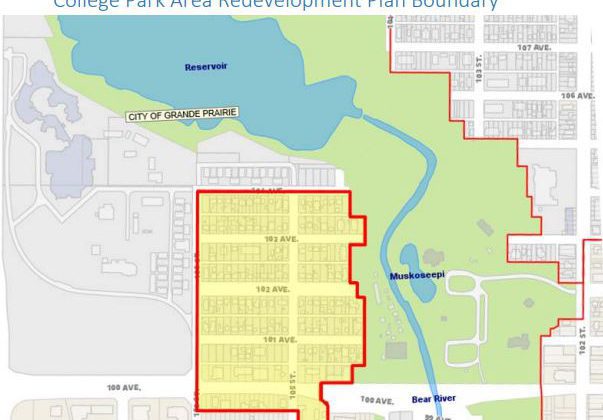 Residents in College Park and the surrounding neighbourhoods are invited to take part in another round of public consultations as the city continues to look to tighten up its College Park Area Redevelopment Plan.

College Park, which is situated just west of Muskoseepi Park to 106 Street, and 104 and 100 Avenue, first had the redevelopment plan adopted back in September 1999 but hasn’t seen much in the way of heavy development since.

City Planner Alison Downing says during the last round of public consultation in the spring, many residents had concerns that an influx of new development may bring in an uptick of problems, including safety.

“It may allow for townhomes, apartment buildings or other forms of development and there are some people who are concerned that development may bring different issues to their community.”

Downing adds the city to a point has its hands tied when it comes to what type of new development can be proposed, they are more of a gatekeeper rather than a decision-maker.

“It’s a bit difficult because the city doesn’t do development, the city only puts regulation in place for development. You have to create an environment to encourage that development,” she says.

“Basically, [were] engaging with the community that lives in the neighbourhood as well as those that would be interested in developing new housing in the area as to what barriers are there and what can the city do to help,” she adds.

The public meeting is set for September 17th from 4:30 to 7:30 p.m. at the Ernie Radbourne Pavillion inside Muskoseepi Park. For those who can’t make the meeting, the city has also launched an online survey, which can be found here.