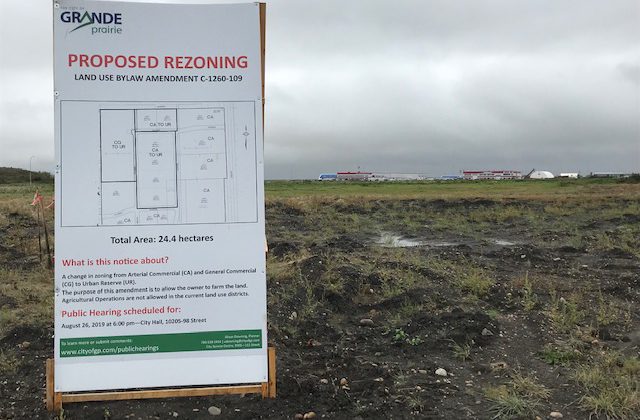 Grande Prairie city council members have approved a local developer’s request to rezone land in the Trader Ridge area. Despite a lot of back and forth between councillors regarding concerns about property taxes and precedence, Trader Properties Inc. was given the ability to turn three pieces of vacant land in the development, north of 132 Avenue and west of 100 Avenue, back to farmland.

“Some council members had the perspective that this might set a precedent for a scheme of tax avoidance; other council members shared that that was not the case,” says Mayor Bill Given, who voted in favour of approving the change. “In the end, the majority supported the rezoning.”

Trader Properties first approached the city about changing the zoning on seven pieces of land in August. According to Given, developers usually work in phases and only ask for rezoning as the development progresses, but that’s not what happened in this case.

“The developer went through and rezoned all of the lands at once. From my perspective, this is a correction of something that likely wouldn’t have happened under the direction of most of our local developers.”

Changing the land back to farmland also means the developer can now apply for a farmland assessment, which could mean lower property taxes. To qualify, Trader Properties would need to prove that farming was happening on the land.

If the developer is successful, it could mean some tax implications and less revenue for the city. At a previous meeting, Given said the approximate tax bill for the rezoned pieces would be around $165,000 and any amount that wasn’t collected from the landowner would have to be picked up by others around the city.

Despite a significant discussion about property taxes at this meeting, Given says any possible dollar amount for losses is just speculation at this point.

“Different types of land are valued differently but, at this stage, council doesn’t know specific details of what those tax implications will be.”

This isn’t the first time Trader Properties Inc. has approached the city. In May, it wanted to have its property taxes from 2018 and 2019 deferred, as well as any penalties cancelled.

It said the undeveloped land was being hit with the same tax rate as that of a fully developed parcel of property, which had created an unfair level of tax. That request was denied.