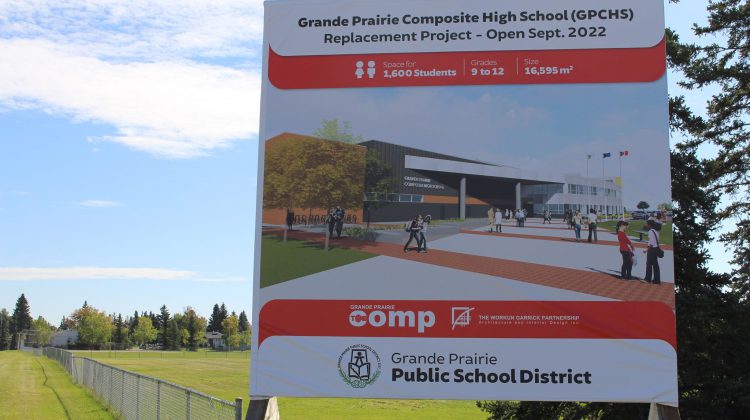 Work is almost ready to start on the replacement for the Grande Prairie Composite High School. Grande Prairie Public School District Superintendent Sandy McDonald says they are in the process of picking a contractor and once that’s completed, shovels could be in the ground shortly thereafter.

“The project is in the tender stages right now and that process will be completed by the end of September and work will begin as soon as the successful contractor is ready to get rolling… If it begins in October, we’re looking at very early in the 2022 calendar year.”

The school site is located near Centre 2000 and is made up of three parcels of vacant land, two of which are owned by the school district and the third by Alberta Infrastructure.

The replacement was announced as part of the $500 million education budget in 2017. Back in May of this year, McDonald said he was hoping work would have started by then but unspecified delays pushed their timeline back.

When construction begins, McDonald says it’s going to be a big undertaking.

“That project is one of the, if not the biggest school construction projects in the province I believe. The school is going to be constructed with an opening capacity of 1,600 students and so it’s going to be a big job.”

Once the new school is built the current one will be demolished. A budget for the project has not been released publicly. Students are expected to be inside in time for the 2022/2023 school year.