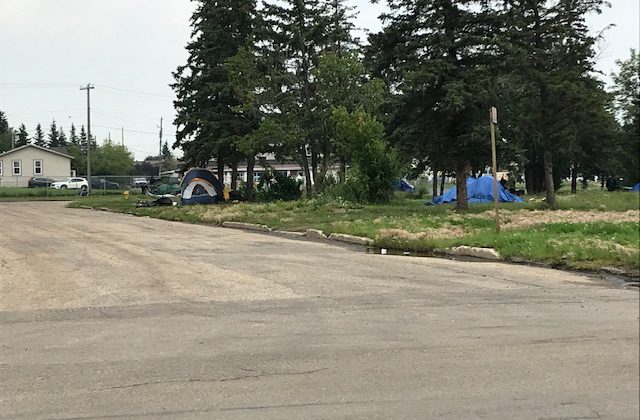 People camping outside Rotary House in Grande Prairie during the summer of 2019 (Emma Mason mygrandeprairienow.com staff)

Members of Grande Prairie’s homeless population are growing frustrated with a lack of affordable housing in the city. Two residents approached city council Monday, urging them to get a new plan in place to address the need.

Murie says he has been in the region for most of his adult life and has seen generosity towards the local homeless population. However, he believes a more in-depth plan must be created in order to better address the problem.

“The public in Grande Prairie, they’re great and they’re fantastic with donations and helping people, but they don’t want it in their backyard. Something has to be done; there has to be affordable housing built somewhere.”

He adds the frustration came to a tipping point in recent days after what he called another bylaw raid on the tent city near Rotary House.

“They’re throwing everybody’s personal stuff, including their ID away. They’re coming again [Tuesday], and if you want to see it first hand, just show up.”

Protective & Social Services Director Chris Manuel caught up with the two men following their public delegation at the council. He hopes he can get the ball in motion in a quick way.

“I’ve been able to invite them to lunch [Tuesday], and have a more in-depth chat, bring some more partners together that work with that population to gain a better understanding as to why we are seeing a proliferation of people in that circumstance.”

Council also ordered an oral report into the camps outside of Rotary House to be delivered at the next appropriate standing committee.