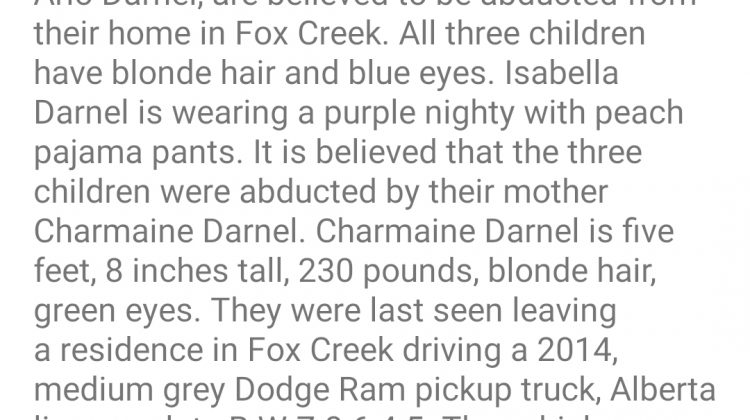 UPDATE 2: Fox Creek RCMP say one person, Charmaine Darnel, remains in custody following her arrest this morning. Darnel, and the three children were allegedly found in a vehicle just north of Slyvan Lake around 7:00 a.m. Saturday. Police say charges are pending, and more information will be released when available.

UPDATE: The Amber Alert is cancelled as the children have been found safe and unharmed.

An Amber Alert has been issued for three young children believed to have been abducted from their home in Fox Creek. RCMP says it’s thought four-year-old Isabella Darnel, three-year-old Elijah Darnel, and nine-month-old Arlo Darnel were taken at 1:30 a.m. Saturday morning.

It’s believed the children were abducted by their mother Charmaine Darnel. She is described as 5’8″, 230 pounds, with blonde hair and green eyes. All three children have blonde hair and blue eyes and Isabella is wearing a purple nightie with peach pyjama pants.