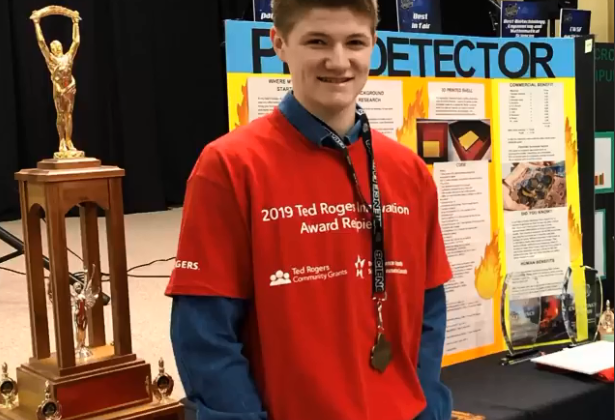 One local teen is taking his invention all the way to the Canada Wide Science Fair this May. Recently, Bezanson School grade 9 student Joshua Street won a gold medal at the Peace Country Regional Science Fair for his fire alarm called the Pro Detector. He says he’s now looking forward to showing it off on a national level.

“I’m really excited and I plan to make my project better than it is now and continue advancing it and I’ll hopefully medal or do good.”

The Pro Detector is a programmable fire alarm that can be turned off with a remote for a short period of time before turning back on automatically. The time delay takes away the need to take out the batteries if it goes off during regular cooking. Joshua says he got the idea from situations he’s had at home.

The project took a few months to create and was put together on his own time. Joshua also won The Ted Rogers Innovation Award, Excellence in Biotech/Engineering/Mathematics, and Best in Fair. It was that last win that cemented his place at the Canada wide event.

Joshua will be joined at that competition by Glenmary School students Vijeth Castelino, Jonathan Goudreault, Mitch Davis and Joshua Hewko who were all chosen by the judges to show their projects as well.

The Canada Wide Science Fair wil be held in Fredericton, New Brunswick from May 11th to 17th.