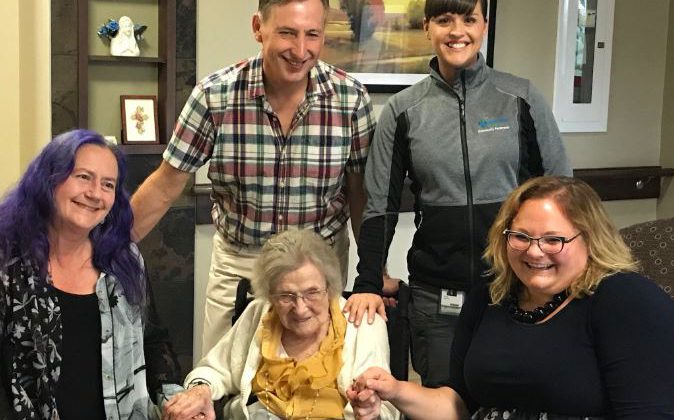 Having a community paramedic in Peace River has so far been a success. That’s the thinking of Alberta Health Minister Sarah Hoffman, who paid a visit to the town late last week.

While there, she met with Tyne Lunn, the paramedic who has been responding to non-emergency calls for seniors and other vulnerable people in their homes since March. Hoffman says she also spoke with one of her patients Anne Kuran and her son, John Kuran, who have benefitted from the new program.

“She was going in once every two weeks to the hospital; her son was taking half a day [off work]. They were going in to have this IV hooked up… and nobody wants to go to the hospital if they can get their care at home. It’s really made her life a lot better.”

The province announced $11 million in February to add 20 full-time community paramedics to the 30 already working in Edmonton and Calgary, and another 26 for new teams in Grande Prairie, Peace River, Lethbridge, Medicine Hat, Red Deer and Camrose/Wetaskiwin. Hoffman says it’s possible more could be added to rural areas if the NDP is re-elected next spring.

“We’re going to continue to analyze the outcomes, but definitely everything that we’ve seen so far shows that this is a worthwhile investment, the cost of keeping somebody out of the hospital.”

Alberta Health is still hiring for a second community paramedic for Peace River, and Hoffman hopes they’ll be able to attract one soon.