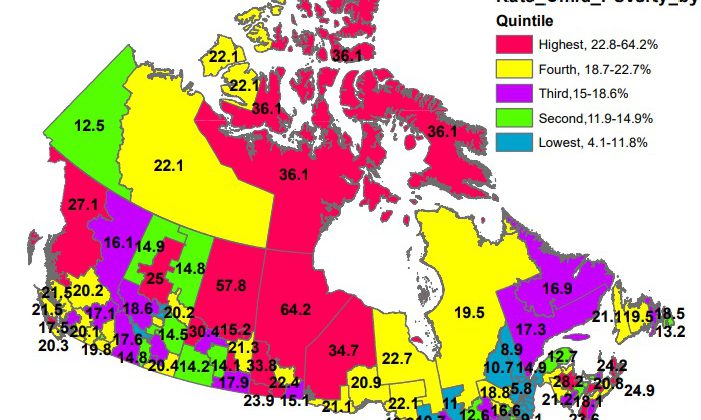 Child poverty rates in the 338 federal ridings across Canada, Campaign 2000

The federal riding of Peace River – Westlock has one of the worst child poverty rates in Canada. A report released by anti-poverty advocacy group Campaign 2000 has found that 25 per cent of children in the region were living in poverty in 2016.

The average rate for all of Canada’s 338 ridings is 17.4 per cent, and Peace River – Westlock is the only Alberta riding that ranks in the highest quarter. Public Interest Alberta Executive Director Joel French says he wasn’t surprised by the findings.

“A lot of the rural ridings that have reserves in them I think will be up there. There are systemic reasons for that and reasons that are the result of government policy choices.”

French notes that Prime Minister Justin Trudeau has said his government will work to address the gap in social services provided on First Nations reserves when compared to those off-reserve. A report in 2016 found First Nations children living on reserve receive at least 30 per cent less funding for their education as children under provincial jurisdiction.

French explains there’s often a cycle of poverty that can be hard to break. Rising class sizes can be a part of that problem, as some children may not get enough attention and don’t develop appropriately.

“So as they grow up, they are much more likely to live in poverty, to have mental health issues, to have other social issues, and then when they have children those kids are born into these households where they’re disadvantaged.

The Grande Prairie – Mackenzie riding has a much lower child poverty rate at 14.9 per cent, which is in the second lowest quarter of Canada. Yellowhead is in the second highest with a rate of 18.6.

French argues it’s important to talk about numbers of children living in poverty, instead of lumping them into a percentage. There are 2,500 low-income families with children in GP – Mackenzie, 3,680 in Peace River – Westlock, and 2,220 in Yellowhead, based on Statistics Canada data.

“Overall the report tells me that there is poverty in every part of the country, in every single one of the 338 ridings that are analyzed in the report has some poverty,” says French. “The situation is very different depending on where you live, so even though it’s a problem everywhere, the problems are much more significant in some specific regions.”

The release of the report coincides with the anticipated first federal Poverty Reduction Strategy. French hopes it will have actionable recommendations that lead to change in poverty levels.

“Clear targets and timelines so that we can measure it out and regular reporting, because if those things don’t happen, if the information doesn’t get out there, then it’s very, very difficult for Canadians to analyze how well it’s doing.”

French also hopes the Alberta government will follow suit with its own poverty reduction strategy. We reached out to the MPs of Grande Prairie – Mackenzie and Peace River – Westlock for comment.