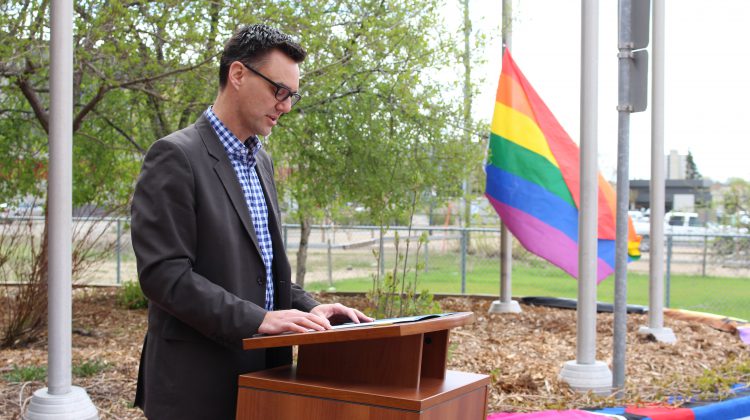 Mayor Bill Given marks the International Day Against Homophobia, Biphobia and Transphobia in 2017. Photo by 2DayFM

The LGBTQ2 community is looking to their allies to continue to provide support on the International Day Against Homophobia, Transphobia and Biphobia. The City of Grande Prairie will mark the day Thursday with a proclamation and flag raising at city hall.

Gay and Lesbian of the Peace Association (GALAP) Director Chancie Kluyt says this year’s theme is “Alliances for Solidarity”.

“We really need strong support from our allies to help us lobby for legal change and to facilitate that cultural shift that we need for wider acceptance. Those relationships are really important to make that happen.”

Kluyt says she has noticed a clear shift in attitudes. She sees the act of flying the flag at city hall as something that cements that. She’s not sure it would have happened even just a few years ago, but she says that visibility is important.

“When everyone is presumed straight until proven gay there’s a bit of a cultural bias there. It kind of prevents people from maybe living their authentic life when they kind of feel like that’s not something that happens in their community or is accepted in their community.”

The flag will be raised at 11:00 a.m. at City Hall. This is the second time the city has marked the occasion. GALAP will also be involved in a number of Pride events, including a pancake breakfast during the Pride Carnival at the Eastlink Centre.

Kluyt says they are also planning an LGBTQ2-focused art show at the Centre for Creative Arts. A call for submissions is expected to be put out by GALAP in the coming weeks. Details will be available on their social media feeds.