The next provincial election isn’t expected for a while but Todd Loewen is already in the starting blocks. On the heels of the first United Conservative Party convention Grande Prairie – Smoky MLA Todd Loewen has announced his plans to seek the UCP nomination in 2019.

That nomination though will be in the Central Peace – Notley region. Due to the electoral boundaries changing The Grande Prairie – Smoky riding will no longer exist. There will be an urban Grande Prairie riding as well that will include most of city and Flying Shot Lake. 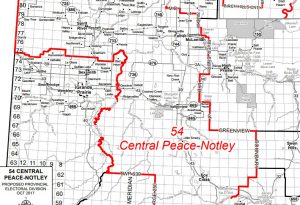 Central – Peace Notley will include the eastern portion on Grande Prairie – Smoky including Valleyview and Fox Creek. It’s an area that Loewen says he knows very well.

“It’s been where I’ve spent most of my life. So that area there and of course off to the northwest there and all the way through that Fairview country. It’s all very similar country as far as agriculture, forestry and oil and gas.”

Wayne Drysdale has announced his plans to retire after the next election. Loewen says he has a lot of respect for Drysdale. There’s been no indication of any UCP contenders planning to run for the nomination in the new Grande Prairie urban riding as of yet.

Loewen feels confident going forward with the UCP’s now that they have had their first official convention. Loewen says more that 2500 people attended the gathering a week ago in Red Deer. He says there was something like 1700 policy proposals that came forward which he says is the UCP “grassroots” way.

“So I think that was kind of a great process where everybody got an opportunity to put in their ideas. Of course it was open mic there too. As policies came forward anybody that wanted to could speak. So I think there was an opportunity for a lot of input there.”

Loewen agreed that the “grassroots” aspect of the UCP promises were important to people in the region saying they are a hardworking, entrepreneurial bunch.

Questions swirled around their “Grassroots Guarantee” website which stopped working after their convention. Despite telling CTV News it was an IT problem Monday the website is still not active Sunday.