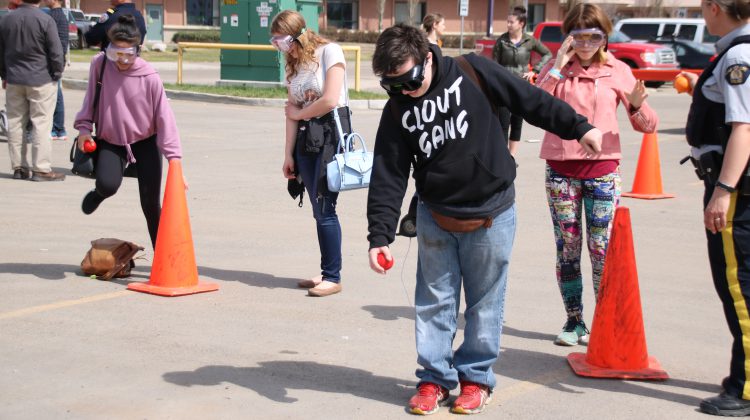 Local high school students may now have a better understanding of the potential consequences of impaired driving. On Wednesday and Thursday, grade 11 and 12 students from the Comp, St. Joe’s, Peace Wapiti Academy and Charles Spencer heard directly from the people who would respond if they got into a crash.

It’s the first time City Enforcement Services, the Grande Prairie Fire Department and EMS have teamed up with the Youth Initiatives and Education in Lifestyles and Driving Association out of Spruce Grove to speak to local teens. Organizer Constable Krystle Czaplicki believes interacting with first responders may drive home the message even more than other campaigns.

Firefighters showed the youth some of the tools they use when responding to crashes, while mounties and bylaw officers took them through the laws surrounding drinking or doing drugs and driving, as well as driving while distracted. The YIELD Association also brought goggles to show the effect of alcohol and marijuana impairment, and an interactive video game to test their reaction time while texting and driving.

While the two day event took extensive cooperation between the agencies and the school districts, Czaplicki says it will all be worth it if just one teen thinks twice before driving drunk or high.

Czaplicki adds that they were originally only going to include grade 12 students, but decided to open it up to those in grade 11 as well.

“Which is actually a good target group because they’re just starting to get their licences and some of them are going to be turning 18 soon and have access to all of the things that are legal out there.”

The timing is also appropriate with the impending legalization of marijuana and new laws in Alberta surrounding impaired driving.