Back to back track meets in Grande Prairie 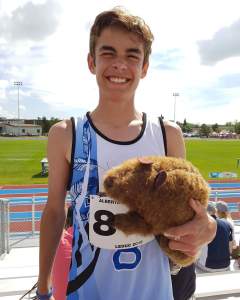 Staying active is an important part of staying healthy. About 400 junior high students will get a hefty dose of activity on Friday. Peace Wapiti School Division is holding the annual Dave Bleile track meet.

“It is a great way to end the athletic year as we bring together student-athletes from across the Division to compete. There’s a lot of school pride shown as schools compete against one another for plaques which are awarded to the top schools overall in each category.”

The track meet took on the Dave Bleile name after the longtime teacher retired in 2010. He spent the bulk of his career at Helen E. Taylor School in Wembley. He was a major part of the track meet for more than 30 years. PWSD says he has continued to volunteer even after his retirement.

The event will begin at 10:00 a.m. at Legion Field in Grande Prairie.

The end of the school track season though kicks off another one. The 16th annual Peace Country Classic Track Meet will go Saturday at Legion Field.

The morning will be the GP Kids Meet. It’s a chance for elementary aged kids to try out track events including sprints, standing long jump and shot put.

The afternoon will be the opportunity for local athletes in the U16 and U18 categories to earn their spot on the NW Zone team for the upcoming Alberta Summer Games which will be held in Grande Prairie this year.

One of the athletes to watch is Kobe Grocholski. The 16-year old Beaverlodgian won the silver medal in the 1200m at the U16 Athletics Canada – Legion National Championships in Brandon, MB last summer. Grocholski will be attempting to qualify on the U18 team. He hopes to run the 800m, 1500m, and 3000m.