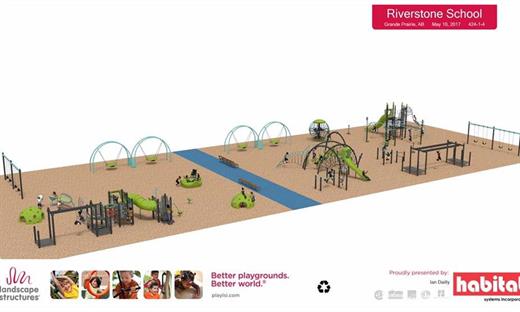 The finish line is in sight for the Riverstone Playground Society. The provincial government has given the group a $125,000 matching grant, after suggesting they apply for one last year.

That amount brings them so close to their first phase fundraising goal of $470,000 that president Jamie Dowhy says they now expect to have the second phase done by the end of the summer as well.

“The $470,000 sort of put us in a position where we would be able to do basic group prep and playground install and purchase, but with this grant now and what we have projected with our upcoming raffles and golf tournament coming up… we should be able to do our ground cover as well.”

The society has been working for the past 2.5 years to plan and fundraise for two playgrounds for the K-8 school that opened in September 2016. Because its construction was announced in December 2013, it is not eligible for the $250,000 provincial grant created last year for schools announced between 2014 and 2018.

However, the government encouraged the group to apply for the Community Facility Enhancement Program, and they received their approval Tuesday. Dowhy says that while they still have more funds to bring in, she’s confident they’ll get the support they need from the entire community.

“We sell out of our raffles every month; we can’t do that if we just concentrate on our school community. We only sell out because the whole community is coming together to help us with this.”

She notes that there isn’t currently a large playground on the east side of Grande Prairie, so the finished product will be used by more than just the families of students. Designs for the second phase, which will likely be a rubber surface surrounding the area, are still in the works but it’s expected the final total could reach up to half a million dollars.

The monthly raffles will run until June, and a fundraising golf tournament is set for late May. Installation is tentatively scheduled for five days starting August 17th, and Dowhy says they’ll likely need around 70 volunteers.