While the City of Grande Prairie may be nearly 1,000 kilometres away from the Humboldt Broncos fatal bus crash site, the community is trying to do what it can to support the victims. Donations have been made to the GoFundMe page, hockey sticks have been left on porches as tribute, and local events and fundraisers are being held. 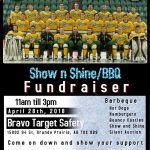 A Show n’ Shine and barbecue has been planned for April 28th at Bravo Target Safety in Grande Prairie by area residents Andrew Southern and Jesse Stewart. The event will also include bouncy castles and a silent auction, with all donations going toward the survivors and the victims’ families.

Southern is a volunteer with the Wembley Fire Department, and says he has seen first hand the effect a tragic event like this can have on everyone involved.

“I do the best that I can do with the resources I have to help people in these terrible situations, because not only is it the right thing to do, but it speaks to your character and feels good in your soul. I am very thankful and appreciative of how willing and eager and responsive our region has been in these crucial and impactful events.”

Another first responder looking to get involved is Grande Prairie paramedic Jessica Frith. The Saskatchewan transplant is working with local company True Heroes Coffee to donate boxes of coffee, cappuccino, and hot chocolate to agencies like the RCMP, fire departments, EMS and hospital staff who were a part of the emergency response to the bus crash.

“I know just how small and tight knit communities are. I know that there’s going to be a lot of people impacted by this, and just based on the fact that there was 31 agencies involved shows just how widespread this is.”

The drinks will be delivered with personal thank you notes as a way of recognizing what the first responders have been through. To send boxes of coffee to all 31 agencies alone will cost $4,700, due to slashed prices from True Heroes, and Frith says any donation amount will help.

So far, more than $1,100 has been raised, largely thanks to a $500 donation from the Beaverlodge Fire Department. Donations can be made by sending an e-transfer to [email protected] or [email protected], or by contacting them over Facebook.

Tina Shaw also found a way to help out when she realized her son wouldn’t have anything to wear on the nation-wide jersey day in honour of the Broncos Thursday. Through her home business Crafty Things 4 Crafty Homes, she has been printing t-shirts with the hockey team’s logo for a minimum donation to their GoFundMe page. 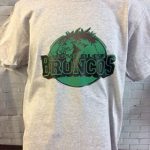 “I just wanted kids and adults who might not be sports families and don’t have a jersey to wear Thursday to have something to show their support too. [We’re] not hockey or sports people, but still want to show our support.”

Demand was enough that she’s run out of supplies, and $460 has been raised. Shaw is hoping to round that up to $500 or even $600 by Wednesday night.