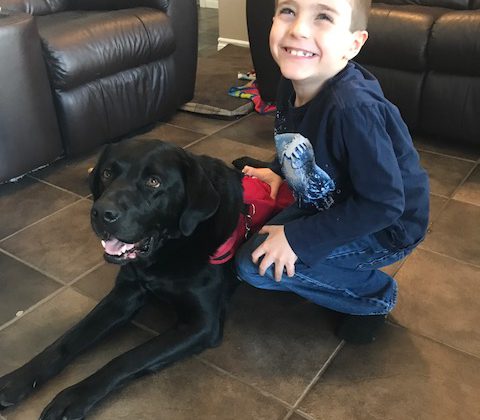 The phrase guide dog often leads people to think of seeing-eye dogs but they can help in a variety of ways including with autism assistance. 8 year-old Lauchlan Silvester-Degen has had his dog Stevie for a year and a half now and it’s not only made a difference for him but for his whole family too.

The three year-old black lab came to the family through the Lions Foundation of Canada Dog Guides program in 2016 after Lauchlan spent three years on the waiting list. The family got the suggestion from professionals they were working with initially to help with his tendencies to take off without warning. Lauchlan’s mom Alyeska Silvester-Degen says they struggled with his inability to anticipate things he hasn’t experienced.

“If he saw a kitten on the other side of the road he could easily just bolt across the road. So one of the things Stevie does is when he’s wearing his harness Lauchlan is tethered to the harness and whenever Stevie feels tension on that tether he’s trained to [do what’s] called a hold. He’ll drop down and hold Lauchlan back and prevent him from running off.”

Silvestser-Degen says they noticed a difference day one. While it took a while for the bond to form between the dog and his new “teammate” there was an immediate improvement in Lauchlan’s communication and she says they noticed less stress and anxiety in the home.

“Because Lauchlan is less escalated it kind of trickles down to everybody else. We found that the younger two developed a better relationship because Lauchlan was more with his dog and the dynamics just shifted. It just made everybody more calm I think.” 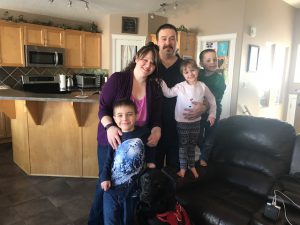 The Silvester-Degen family with Stevie

Silvester-Degen also thinks this will help develop Lauchlan’s social skills, something she hopes will be a benefit for him in the future as well. She says Stevie is a great conversation starter.

“People are always asking us about the dog and always talking to Lauchlan about the dog. So it’s really improved how he interacts with people socially. He has a lot of friends at school because everybody wants to be friends with the kid with the dog.”

She says it’s helped him become a calmer person, something Lauchlan agrees with.

“He helps me be nice and calm when I’m really a little frustrated.”

It’s expected Stevie will work for Lauchlan for another five or six years. Then they hope to include Lauchlan in the decision around another dog when the time comes. Dog guides typically retire around six to eight years-old and can stay with the family or be re-homed depending on individual situations.

The Lions Dog Guide program breeds their own dogs and also does all the training. The puppies are fostered for the first year and are taught some basic skills. Then they are assessed to see which program they may be best suited to. Along with the autism support dogs they also offer vision and hearing assistance dogs, diabetic and seizure alert animals and service dogs who can help people with limited mobility complete some basic tasks.

Lauchlan has used his birthday as an opportunity to raise more than $200 for the upcoming Petvalu Walk for Guide Dogs. The event will be held May 27 at the Lions building in South Patterson.

The estimated cost of breeding and training the animals is said to be around $25,000 and they receive no government funding. Silvester-Degen was happy to learn that the Alberta government had recently announced additional support for service dog organizations in the province.