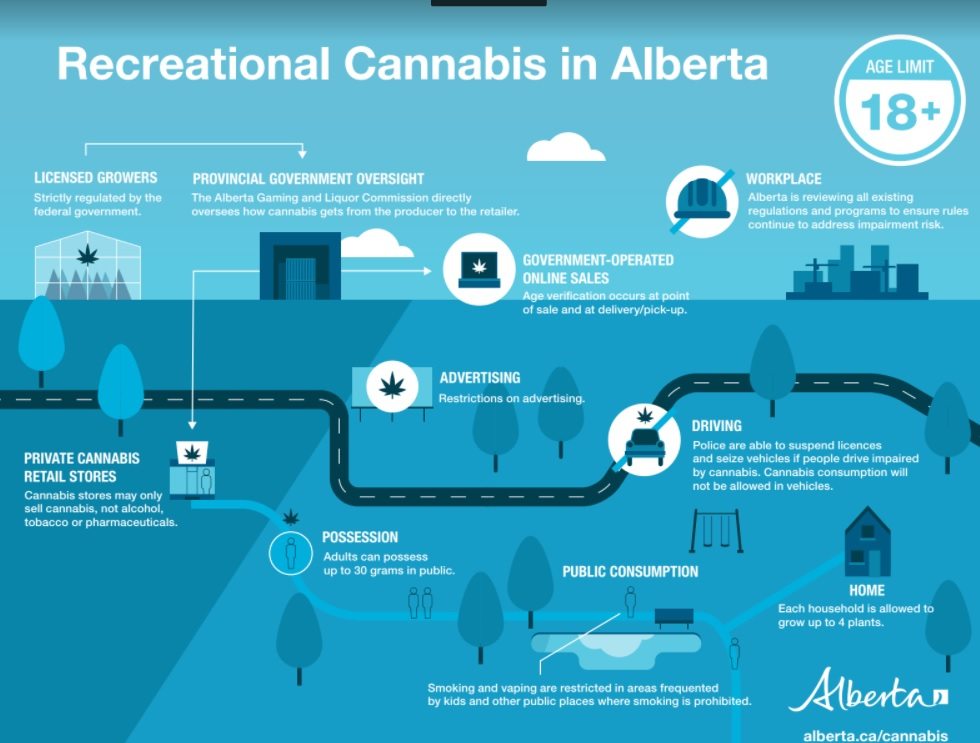 The Alberta NDP are laying out their plan for marijuana legalization and it includes a mix of private and government-run distributors. Legislation proposed today would have the provincial government operate online sales while private owners could open retail locations.

The Alberta Liquor and Gaming Commission would oversee the retail locations and would formalize licensing regulations in the new year. Justice Minister Kathleen Ganley says the legal age for purchase and consumption would be set in line with alcohol and cigarettes at 18 years old.

“Physical retail locations will have strict government oversight through licensing by the AGLC and will only be able to sell cannabis products. No alcohol, tobacco or pharmaceuticals will be permitted alongside cannabis.”

One of the main priorities for the plan was safety, which includes keeping pot out of the hands of children. Ganley says many people raised concerns about the age verification process with online sales during consultations. Through a government run online distribution, Ganley says confirming the purchaser’s age becomes much easier.

She also clarifies that the Alberta system would not ship to postal codes outside the province. Currently, retailers in British Columbia function with municipal approval despite essentially being illegal. Ganley says she has had conversations with her B.C. counterpart, but can’t say for sure what guidelines other provinces will put in place for online sales.

Another focal point of the legislation is ensuring that the illicit market is limited, by finding a balanced price that also takes the federal government’s tax into account. That’s something Jeff Mooij, the owner of 420 Clinic, thinks is a responsible model.

“With Alberta’s strong entrepreneurial spirit, this retail model allows companies like ours to create hundreds, even thousands of jobs for Albertans. Not to mention, the competition created through private cannabis retail will allow our province to continue to combat the black market.”

Quebec has called for the federal government to push back legislation to 2019, and while Ganley calls the timeline ambitious, she says the obvious choice was to make their rules and not sit back and wait for the feds. She also does not seem concerned about the ability for permits to be issued ahead of this summer’s deadline.

“We do intend to have that out the door and issuing licenses in advance of July 1st so that the individuals running the businesses have time to set up.”

“I do know that we do need to work with the federal government,” Ganley adds, “to ensure that they’re willing to allow possession of cannabis by the people who will be doing the [retail] in advance of the date. Otherwise, they’re not going to be able to have product on the shelves for July 1st.”

Other rules in the legislation include the right to grow plants in a residence, with up to four per household allowed, not per person. It also establishes restrictions around where cannabis can be smoked and vaped in public and advertising guidelines.

Online support for these guidelines was 88 per cent. Over 60,000 people participated in the online survey, along with 100 organizations.