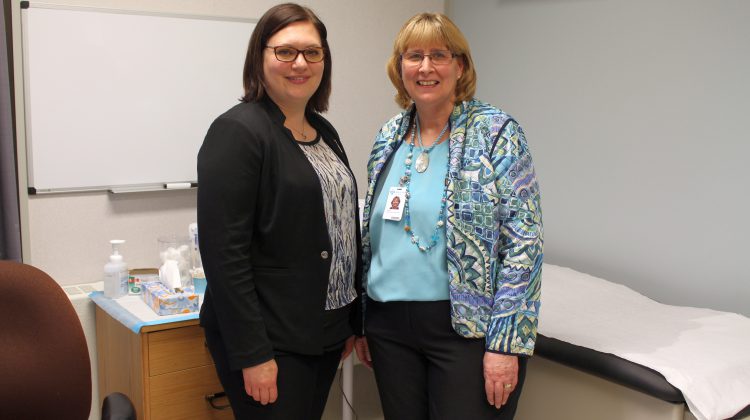 The province is hoping to increase awareness of the new opioid dependency treatment clinic recently opened in Grande Prairie. Associate health minister Brandy Payne toured the clinic in the Northern Addictions Centre Wednesday, along with the Rising Above Park Campus in the former Young Offenders Centre nearby.

“They’re not yet at capacity,” Payne says of the ODT, “but we know there are a lot of people in the community that are looking for this sort of treatment. [We’re] identifying some ways that we can get the word out to the community, but also support people to get started on the program and to stick with it.”

This is the first AHS program in the city to offer replacement therapy. People can start taking drugs like Methadone or Suboxone to replace the opiate they’re currently using. Payne says medical studies show this is the “best” treatment for opioid dependencies.

“The time when someone is most at risk for an opioid overdose is actually when they’ve gone through a period of detox because their system’s no longer used to the drug. So, by taking medication such as Suboxone or Methadone, they’re able to avoid many of the withdrawal symptoms.”

Debi Morris with Alberta Health Services says the program has room for 300 clients, but only 22 are currently taking part. Another 11 have signed up since the May 29th start date, but didn’t finish.

Despite that, Payne says the province overall has capacity concerns and is working to increase the number of treatment spaces. They’re also looking to expand outside of major centres using Telehealth.

“Often the first couple of days of initiating treatment it’s best to do it under direct doctor supervision, but we’re working with pharmacies across the province to provide the prescription via Telehealth, as well as family doctors.”

The outpatient clinic also houses one of only four medical detox units in Alberta. That means people from out of town can use the beds to detox for 5 to 6 days before being discharged back home. Once there, the patients can still connect with physicians through video conferencing.

At the same time, Payne says the government is trying to stop the opioid crisis altogether with a mixture of public education and working with the Alberta College of Physicians and Surgeons. The college recently gave doctors stricter guidelines when it comes to prescribing opioids. Payne also suggests more defined treatment plans for patients given opioids.

“What’s the plan for that individual as they go through their recovery and maybe no longer need that pain management to support them to wean off of that pain medication?”

Payne commends the staff at the Northern Addictions Centre for their efforts so far.

Note: a previous version of this article indicated the ODT program is the first in Grande Prairie to offer replacement therapy. It is only the first program run by Alberta Health Services. We regret the error.