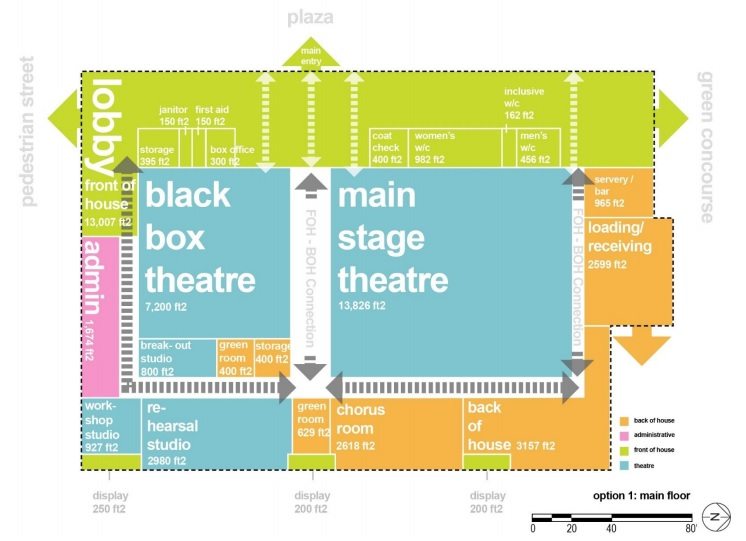 The cost of building a regional performing arts centre on the Montrose site downtown would be at least $99.9 million. Consultants with Stantec Architecture have spent more than a year looking into the feasibility of the Grande Prairie Regional Performing and Media Arts Centre, and say that amount would cover the minimum requirements of the local arts community.

The first option presented to city council last week would include a 1,000 seat main stage theatre, a black box theatre with 350 retractable seats, and studios, along with the lobby space, offices and other necessary spaces. The second would add on more rentable meeting rooms, commercial/retail space, a commercial kitchen and archive storage.

The city would be looking at a price tag of $121.6 million with the extra features. Both would include a two-floor parkade with room for 274 vehicles. Stantec Architecture Vice President Enzo Vicenzino explains the more basic one would satisfy the community.

“However, having revenue generating space is obviously going to not only help this facility, but also the community. Instead of practicing in each other’s homes with guitars and drums they can actually rent the space here and use that space for practice.”

Based on existing facilities in western Canada, it’s estimated the PMAC could bring in more than $1.3 to $1.5 million a year in revenue over its first five years. Operational costs would look to be between $2 and 2.3 million. Stantec senior business consultant Glynis Middleton explains that arts facilities generally aren’t expected to operate at a surplus.

“In a facility such as this, there is typically some kind of municipal subsidy in order for the facility to operate. It is typically not enough just to sell the tickets.”

It’s expected the city would use Municipal Sustainability Initiative and Federal Gas Tax funds to build the centre. If its annual share was 10 per cent, it could be looking at contributing $15.3 million MSI and $2.85 million GTF.

Because it would be a regional facility, funding could be based on either share of population or share of property taxes. Stantec says building the PMAC would cause the region’s Gross Domestic Product output to rise by $174 million, with another $4.5 million added annually through operations.

As for running the facility, it’s been recommended that the City of Grande Prairie own it, while a new, non-profit organization dedicated to the performing and visual arts operate it. The two parties would share responsibilities for management.

“What we’ve seen in western Canada is that municipalities are not in the business of managing and operating,” says Middleton. “They don’t do it as well as the private sector. As well, there’s this whole notion of keeping an arms length between the facility, which is an asset, and the operations, which is actually something that should be in the hands of those that are using it.”

Right now, Grande Prairie has at least 16 venues for live performances, but only five built specifically for that purpose, including the black box theatre proposed by the Grande Prairie Catholic School District. Combined, they have more than 1,700 seats, and Grande Prairie Regional College is looking at adding more.

Middleton says they would normally recommend a theatre with 500 to 750 seats be built for a community of Grande Prairie’s size, but based on consultation with 80-some user groups, the desire is for 900 to 1,000.

The city’s community living committee has approved including $200,000 in the fall 2018 budget review for the next city council to consider doing a business case for the project. Councillors were insistent that it include a market analysis.