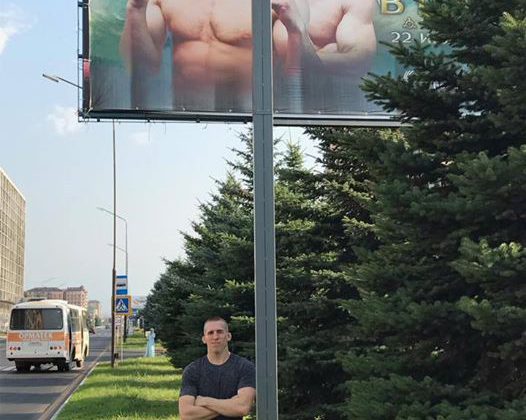 A local MMA fighter has taken his talents abroad. Spencer “The Judge” Jebb has signed a six fight, exclusive deal with M-1 Global, and the first will be held this weekend in Nazran, Ingushetia, Russia. He says Russia is becoming the world’s hot spot for the sport.

Jebb was first approached by M-1 for a last minute fight in April, but couldn’t get a visa in time to make it. His willingness to accept a fight on short notice caught the company’s attention and Jebb signed a contract with new management.

After this fight, the deal could take him anywhere in the world, as the most recent one was held in China, and the one after this will be in Finland. He has his fingers crossed for somewhere exotic, and says he’s hoping his career will take him as many places as possible.

“I think it’s my second highest thing on my bucket list of MMA, so I’m definitely meeting my goals. It’s a dream come true and sometimes it’s a little bit surreal to remember from where I started to where I am now.”

Jebb got his start in King of the Cage and Unified matches, and soon made himself a staple on Xcessive Force Fighting Championship cards in his hometown of Grande Prairie. He has a 12-5 record and recently moved to Edmonton to further his training.

His opponent for Saturday’s bout is Ingiskhan Ozdoev, who has a 3-3 record. Jebb says he’s been able to do a little research through YouTube videos.

“He’s well-rounded. From what I’ve seen, most of his fights he prefers to strike and he has a few tendencies, but at the rate that us young guys are going, you’ll never find the same fighter two fights in a row; guys get so much better all the time.’

Over his next six fights, Jebb says he hopes to keep winning and earn himself a title shot. His first will air on the Fight Network and M-1 Global’s website. However, due to the time difference, the event will start at 4 a.m. local time Saturday.