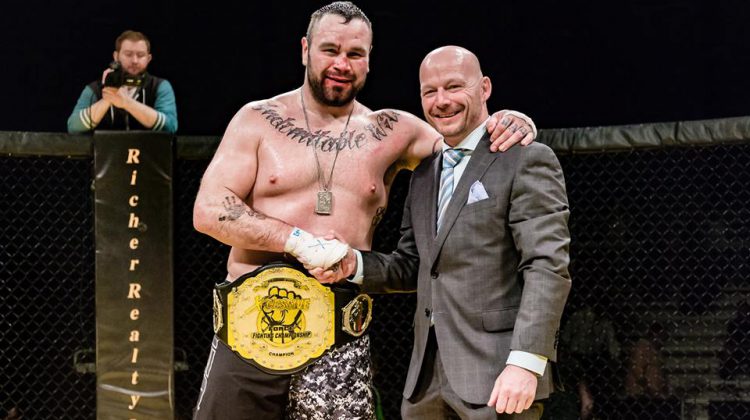 The Edmonton MMA fighter who died after being knocked out in a boxing match was the reigning heavyweight title holder in Grande Prairie’s Xcessive Force Fighting Championship. 33 year old Tim Hague was taken to hospital in critical condition after his fight Friday, and his family confirmed Sunday he had passed away.

Nicknamed “The Thrashing Machine”, Hague won the XFFC belt on April 15th, 2016 in a bout against Kalib Starnes. XFFC promoter Darren Cliffe says he’ll be remembered as one of the nicest guys in the sport.

Hague was a grade four English teacher at École Bellevue School in Beaumont, and had his championship belts proudly displayed in his classroom. He had also won titles with King of the Cage Canada and Unified MMA, and had fought in the Ultimate Fighting Championship.

In his fight against Adam Braidwood in Edmonton, Hague was reportedly dropped several times before he suffered the knockout blow in the second round. Hague had been knocked out six times since the summer of 2015, and Cliffe hopes fighters learn to take knockouts seriously.

“A lot of guys try to get past it… A fighter’s suspended, then I go and I look on up and coming events and I see that fighter is trying to fight on another show while suspended.”

Depending on the severity of a knockout, fighters can be suspended from action for months. Cliffe says there’s also a responsibility on combat sports commissions to make sure athletes aren’t competing when they shouldn’t be.

Hague’s last professional MMA fight was in Russia in July 2016. He started boxing again that September. Cliffe says he had spoken to him many times about wanting to retire, but a fighter himself, he understands that can be the hardest thing to do.

“Despite what people around you tell you, you either have that will to fight or you don’t, and it’s very hard to sit. Even for myself, when I sit and watch the fights at my show, quite often I want to just be in there and do my thing. I don’t think Tim was any different; once a fighter always a fighter.”

With UFC 216 scheduled for September in Edmonton, Cliffe expects Hague was trying to put together a few wins in order to get a spot on the card. He also criticizes Friday’s matchup, as Braidwood won a world championship in his last fight and Hague only had a 1-2 boxing record.

Hague is survived by his son Brady, his brother Ian, and his sister Jackie. Cliffe says he will be honoured at the upcoming event on July 29th, with a fundraiser for his family.

A GoFundMe page has been set up to support The Hague Family at this time. If you can, please donate. Thank You