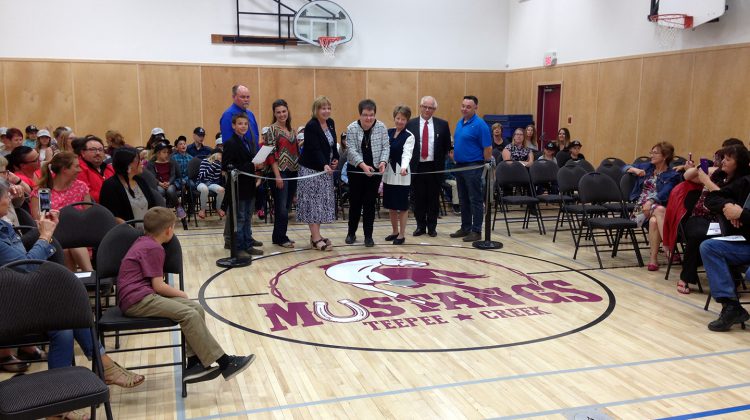 A ribbon cutting for the Teepee Creek School modernization on Friday, June 9, 2017

Up until the end of 2016, walking into Teepee Creek School was like taking a trip back to the 1950’s. The building was put up in 1955, and other than some additions, not much had changed since then.

The completion of the upgrades announced in January 2014 was celebrated on Friday. Although it only serves 75 students, Peace Wapiti School Division Superintendent Sheldon Rowe says it’s a necessary school due to its location.

“So to be able to get in there and modernize it and take it from that look of 1955 and bring it up to the look of 2017 was fantastic. I used to teach out there; it’s always fun to go back to a school like that where it looks bright and new and ready to start over again.”

The project was budgeted at $3.75 million, but Rowe says they spent about $100,000 less. The building’s capacity remains the same at 158 students.

As classes start to wind down, PWSD is also celebrating the grand opening of the replacement Robert W. Zahara Public School in Sexmith. The $18 million new school replaces the original built in 1978/1979 and Rowe says it was at the top of their wish list.

“The slab-on-grade was moving up and down as a result of the clay swelling and shrinking, and it was causing the building to separate in places. While there was no danger there at that time, it still had some structural issues and so it was great news for us when the province announced that.”

The school has 416 K to 6 students but has room for 550. Once County firefighters used the old building, it was torn down and became a parking lot.

Despite the replacement school and modernization, more school projects are still desperately needed for the district. Rowe explains that when Whispering Ridge opens in January, about half of the students from Harry Balfour will move there. However, they’re still waiting on a replacement for the overcrowded Harry Balfour.

“We’re hopeful that we can get a place for Harry Balfour and build a new school on the south or southeast part of town. At that point, we would look to the province to reallocate Harry Balfour to another school system or whatever use the province deems appropriate.”

The school has close to 800 students now, and Rowe says it was crowded when there were 600. The replacement is on the province’s sunshine list, and then they’ll look at their high school and growth in Clairmont.