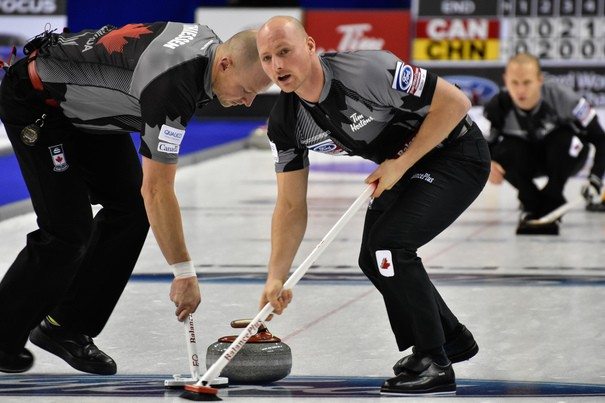 Tom Sallows is ready to do whatever he can to help Team Canada win gold at the 2017 World Curling Championships. The Grande Prairie curler is the fifth on Brad Gushue’s rink, which is lead by Beaverlodge’s Geoff Walker.

Sallows helped out at the Brier as an unofficial fifth and replaced Walker at the Elite 10 as he recovered from a shoulder injury. His goal is to be the hardest working fifth man there.

“Do whatever I can to help them in any which way. It could be anything from going to pick up food to putting broom heads on for them, or more important stuff like scouting rocks, even cracking a joke here and there to try and keep the mood light.”

This isn’t the first time Sallows has been brought along to the world playdowns. He was an alternate for the bronze medal-winning Canadian team skipped by Pat Simmons in 2015.

Sallows played with Walker for several seasons at the junior level and says it’s a dream come true to play together at this level. He adds he appreciates every opportunity given to him.

“It’s just like anything in life, you try to work as hard as you can and enjoy it. The best part is the friendships that you get afterwards; it’s just like going to war with these guys. You develop such close relationships when you spend that much time on the road and you’re living and dying with every shot right along with them.”

Sallows skips a team out of GP, but didn’t play as much this year. He still got the chance to play in several tournaments with other teams, and make provincials with his own.

The Canadians are the only unbeaten team at 5-0 after seven draws of round-robin play.