Plans for an Afghanistan war memorial in Grande Prairie have grown and moved. A monument was originally slated for Veterans Park, but engineers discovered the land used to be a high water catch basin in the 1950s and it would cost $1.5 million to fix it. Renee Charbonneau says plan B is now an empty piece of land next to the ANAVETS hall, which she says is often forgotten by the community.

“We decided that if we built it here, it would help bring more notice to our organization, the facility we have to offer, and that it would give us the unique opportunity to get children and veterans coming together.”

The scope of the project has also grown substantially from a monument and light armoured vehicle to a full memorial park. Plans now include gardens with walkways and points of interest to explore. The hope is that teachers could use the park for fieldtrips.

The six sections will take people through Canada’s military history, tributes to the three fallen members of the Loyal Edmonton Regiment, and information on Grande Prairie’s air and army cadets, as well as ANAVETS and the Royal Canadian Legion. One will also show how Grande Prairie was home to the No. 132 Canadian Army (Basic) Training Centre during World War II and was the regimental home to D Company of the Loyal Edmonton Regiment.

While Grande Prairie already has a cenotaph, Charbonneau says it can sometimes be harder for new veterans to be recognized.

“There’s been a lot of time passed since the 1940s, and it’s important that our youth today feel a connection to their veterans, and that those veterans aren’t just grandpas and great grandpas and uncles.”

As of right now, Charbonneau says the Afghanistan monument is almost fully funded. It will list the names of all 158 Canadians killed in that country, including Timothy Wilson, who was born in Grande Prairie. An unveiling ceremony will be held in September 2017.

The second phase will be the building of the walkways, gardens, and information stops, and it’s hoped that will also be done by next September, but if there are delays, no later than the beginning of January 2018. The third phases is the purchase and installation of the decommissioned LAV III unit, for which the city recently got approval. It will be the northernmost community with one.

When the project was first proposed, it was expected the monument alone would cost $30,000 to $50,000. With all the added features, it’s now expected to run $200,000 to $240,000. Charbonneau has received a $10,000 grant from the Canada Legacy Project, and is applying for a matching grant from Veterans Affairs. Several other companies and organizations have offered discounts and volunteer hours. 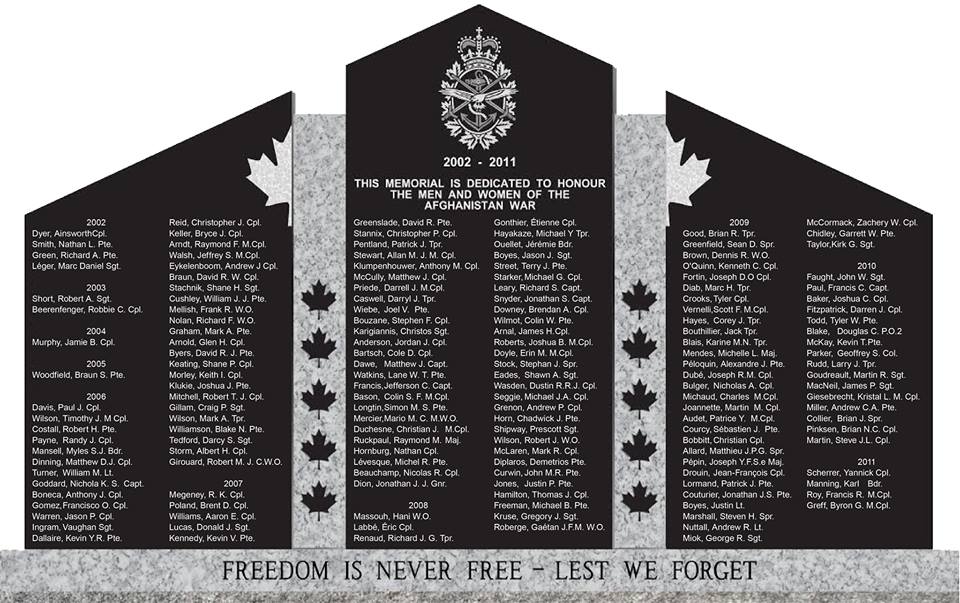