UPDATE: Icy and snowy roads cause problems for drivers 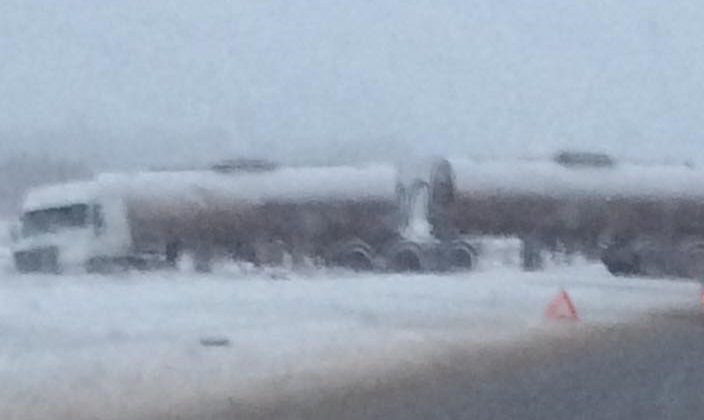 Photo via Nicole Leslie on Facebook. Highway 43 on October 13th between Fox Creek and Valleyview.

UPDATE: Mayor Bill Given posted on Facebook saying that early morning on October 14th the city had 3 truck plow & sanding units out. He says these trucks will continue work until around 8:00 pm on Saturday. Given explains that the city of Grande Prairie staff are monitoring the snowfall and will make the decision today on whether or not to deploy graders and loaders to start a complete cycle of clearing roads.

There have been reports of snow and ice covered roads stretching across the peace country.

Environment Canada issued a special weather statement on Oct 13th for a series of weather systems that were set to pass through the region. The first of the series was projected to bring 2 to 5 centimetres of snow for Thursday but the total for the day had 9 centimetres accumulate. EC predicts more snow for October 14th with around 5 to 10 centimetres in the forecast.

Collisions have been reported by 511 Alberta since the snow began Thursday as well. There has been reports of single and multi-vehicle collisions as well as reports on social media of vehicles hitting the ditch on highways. 511 Alberta also reports that most roads are covered by snow and ice with Highway 40 south of Grande Prairie completely covered.

At around 6:30 am October 14th, a county of Grande Prairie fire engine was involved in a single vehicle collision which the county attributes to the icy weather on Highway 43 between Range Road 41 to 42. They sent out a warning for residents to drive carefully. There were no firefighters injured in this incident.

People on social media have also described some intersections in the city as being particularly icy with South Patterson being highlighted. Residents have also been describing long commutes from one side of the city to the other.

Roads are pure ice in #gpab. Took just under an hour to drive 17.5km across city and back 2 different routes pic.twitter.com/5F7Rz2gRt1

All rural Peace Wapiti School Division school buses were cancelled this morning. The rural Grande Prairie and District Catholic School buses only had 4 cancelled due to weather conditions.

If you want up to date information on the roads, go to the 511 Alberta website.