“Conviction” up for grabs at XFFC IX 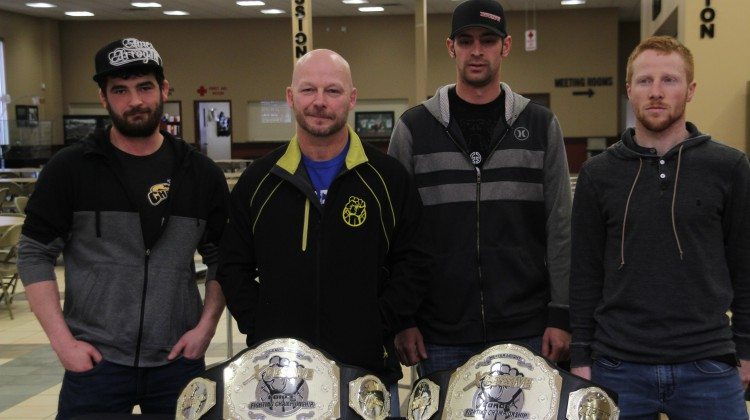 Randy Mahon (0-1), XFFC promoter Darren Cliffe, Jordan Roberts (0-1), and Rick Pfeifer (5-3) with the two belts up for grabs at this weekend's fight

This week’s Xcessive Force Fighting Championship card is shaping up to be one of its best. Promoter Darren Cliffe explains “Conviction” features four UFC veterans and two of the top-ranked fights in the country this month.

“Our co-main event is actually the number one fight in Canada for the month of April, which is insane; we’ve never had that before. We’ve been in the top 10 but we’ve never been number one, and this month’s been really busy with fights so it’s actually a really big honour for us to have that fight.”

The number 7 ranked fight belongs to local favourite Spencer Jebb (11-4), who will be facing Ultimate Fighter season 16 contestant Michael Hill (8-4). This is expected to be a huge turning point for “The Judge”, as a win could propel his career to the next level.

“The last card I fought on, he fought on as well, I think my strengths play into his weaknesses, so I think it’s a good matchup for me. I’ve just got to rely on my training and have confidence in what I know and just go from there; let instinct take over.”

“We are actually known for bringing in really good fighters. I get people coming to me quite often and they ask me who’s going to win this fight. When I feel like I’ve done my job correctly, that’s when I absolutely cannot tell who’s going to win, like it’s pretty much a coin toss.”

There are just a few general admission tickets and VIP tables available.