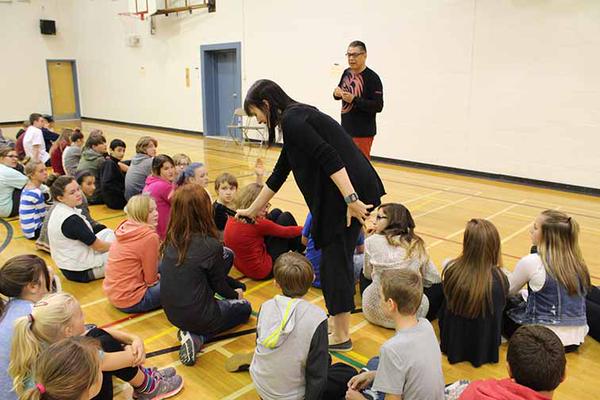 A pair of television stars have made their way through 10 Peace region schools over the past week, speaking to students about how to be successful. Producer, writer, and comedian Monique Hurteau says she wants the youth to understand that coming from a small town doesn’t have to be a barrier.

“There’s so many resources available nowadays that you don’t need to be in a big centre to access it. There are ways, and that’s what we’re talking about; asking questions and finding how does somebody get there from here.”

She says the key is setting out goals and then looking at what they can do today to achieve them. Lorne Cardinal, who played Sergeant Davis Quinton on the show Corner Gas, says in order to do well, the youth need to get an education, and not be afraid of trying new things.

“A lot of successes I’d had is because I’ve done stuff that I’ve never done before or I had the courage to ask and actually do it. It only happened because I asked somebody how can I direct a show and they said, ‘well, you’ve come to the right place.’

They both stress that they can be a resource to these students, along with the internet and distance education. The speakers were brought as part of Peace Wapiti School Division’s First Nations, Metis and Inuit school tour, which aims to give students positive role models.