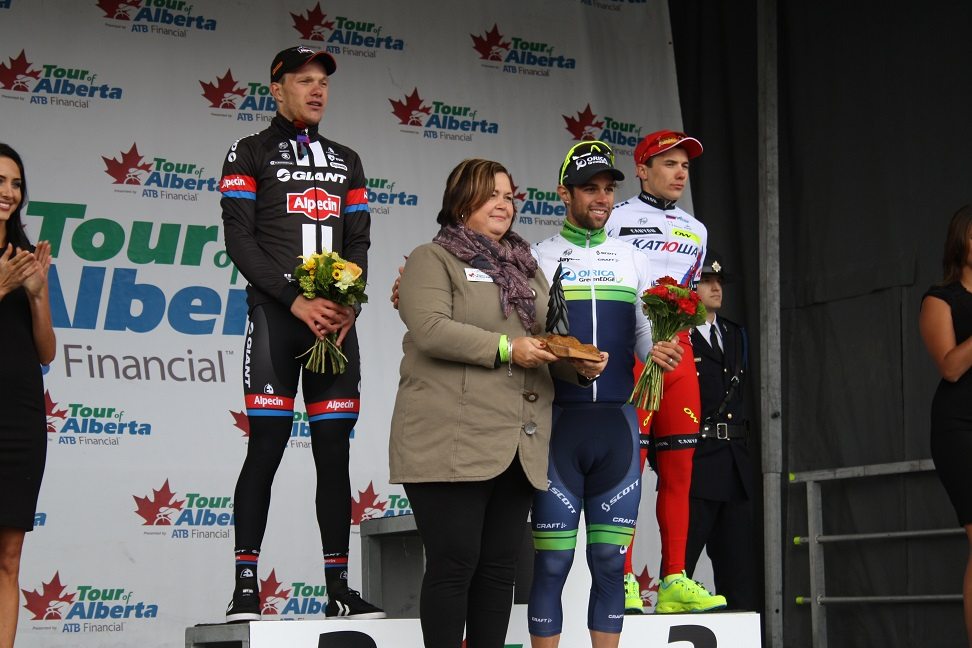 It took a photo finish to determine the first place cyclist in Stage 2 of the Tour of Alberta in the County of Grande Prairie yesterday. Australian Michael Matthews of the Orica Greenedge team earned first place with just milliseconds separating him from the second place rider.

Matthews earned both the yellow leader’s jersey and the sprint jersey for his performance in the stage. He says after Orica Greenedge lost the team time trial by a fraction of a second on Wednesday, it felt like redemption earning the yellow jersey for his team yesterday.

“With the team that we brought here we sort of expected ourselves to really dominate in the team time trials yesterday but it didn’t quite go as we planned. The boys have done probably better than I could have expected to ride in the final 5 km.”

“A lot of us are coming from Europe and we had a bit of a heat wave there so coming here is a bit of a shock to the system. I think a lot of guys were pretty bundled up.”

Stage 3 of the race continues today as the 120 cyclists make their way from Grande Cache to the Jasper National Park. Meier, who won the Best Canadian jersey a second time Thursday, says there are likely a lot of racers who are looking forward to getting into the mountains for the first time in the Tour of Alberta.

“I think a lot of people are really excited to finally have a race where we have some harder stages. I think it’s going to be something that a lot of Europeans won’t really know what to expect so I think some guys will be a little awe struck when we start into the park.”

Matthews will be wearing the yellow leader’s jersey today for stage three, a 181.8 km trek that ends with an uphill finish.