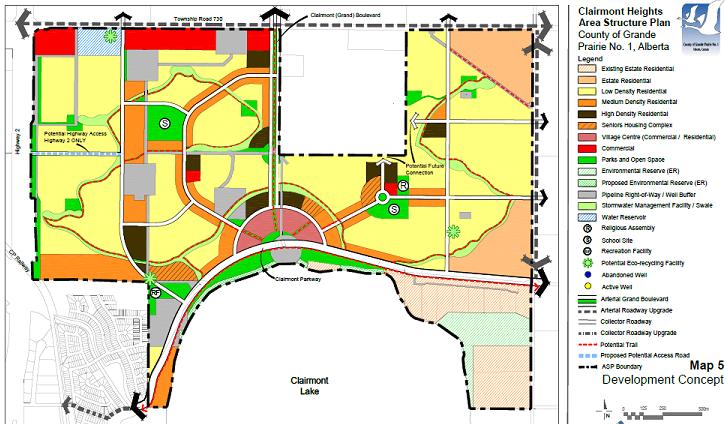 Work to start building the eastern half of the downtown Clairmont Heights development is still more than a year away but the County of Grande Prairie is already looking to attract new retailers to the community.

Clairmont currently has a population of 4000-5000 people and the Clairmont Heights development will have the capacity to increase that number by 15,000. Economic Development Manager Chris King says the community is bigger than most people realize.

“Clairmont itself is actually 6 miles by 6 miles, it’s a very large area. We don’t have a lot of amenities for our residents there so we’re looking to create some commercial development, as well as a little bit of densification to try and get more of a community feel.”

King says by reaching out to retailers, the county hopes to address the Clairmont population that currently feels commercially under served.

“We do have a lot of affluent people in the county. We have a much higher household income in the county then the rest of the country has, and not a lot of existing services. There’s a real opportunity there for retailers and things like doctors, dentists, and lawyers to come into this area”

Residents were recently asked to fill out a retail gap survey in order for the county to better understand what businesses would be the most successful in the growing community.

“The number one in demand service was Tim Horton’s, then Red Lobster, Olive Garden, Starbucks, those are the ones people are looking for. Also grocery stores, people would like to see some larger grocery offerings out in the Clairmont area.”

The area was showcased to potential investors, retailers, landlords, and other interested parties during a retail summit hosted by the county in June.