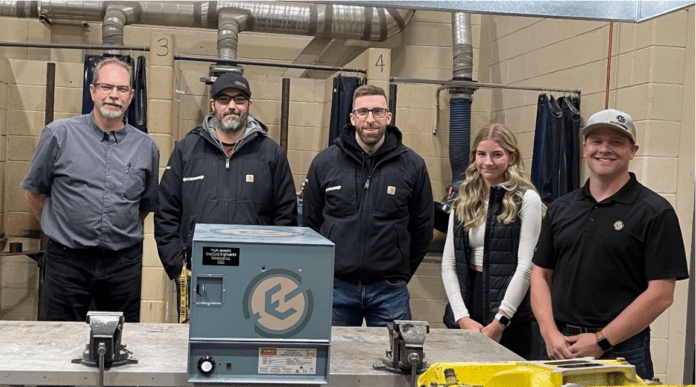 The fabrication lab at Charles Spencer High School has a new rod oven donated by a local business. EnerCorp donated the new piece of equipment, valued at around $1,500, after a student asked the question about why the welds done in class weren’t the same quality done at a professional shop.

Career and Technologies teacher Joe LaValley says that when his student Haille O’Toole brought him this question it created a good teaching moment.

“At that time, she was attempting to use a 7018 rod, and we noticed that the flux was crumbling and the weld was not flowing as it should. I told her that we do not have a rod oven and that for this rod to perform properly, its exposure to moisture needs to be controlled,” LaValley says.

Ryan O’Toole, General Manager of the Production Fabrication Equipment Division of EnerCorp, says when his daughter explained the issue to him he wanted to help the class.

“I grew up here and our company prides itself on supporting the next generation of welders,” O’Toole says. “It is part of our company culture.”

LaValley says the donation of the rod oven will make a positive impact when it comes to creating a more realistic experience in which to teach his students. He adds he tries to prepare his students for post-secondary the best he can by mimicking reality as much as possible.