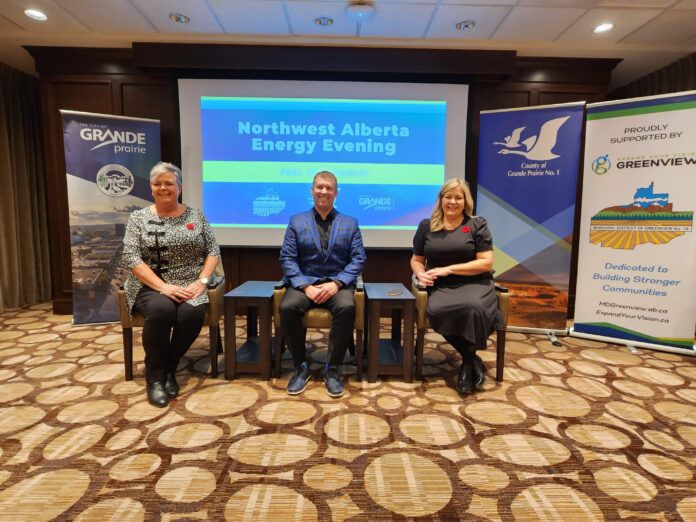 Grande Prairie Mayor Jackie Clayton, Reeve of the Municipal District of Greenview Tyler Olsen, and Councillor for the County of Grande Prairie Leanne Beaupre were in Calgary on Wednesday to highlight the work and collaboration that the three municipalities are doing in Alberta’s northwest. Mayor Jackie Clayton says that what makes the partnership among the municipalities a successful one is the fact that there isn’t a competition, only support. An example of this is the Greenview Industrial Gateway.

“The goal of decreasing the industrial footprint I know is a huge priority of the Gateway and ourselves and the county are happy to support Greenview in those initiatives,” Clayton says. “If any of our municipal partners are successful we are all successful. If something of success happens in the MD then that is a win for the region which in turn is a win for the city.”

“We share the energy industry’s commitment to decreasing our carbon footprint while continuing to supply much-needed energy resources to the world. This is why we are leading the world in innovation and technology development for responsible energy production,” Olsen says.

“People are looking for more in life, and I know from seeing it firsthand that our region has what it takes to grow, attract, and retain the best people,” Beaupre said in the same release. She says the the region off high quality of life, a low cost of living, urban activities and an abundance out outdoor space. Adding “Alberta’s Northwest is not only a safe and prosperous place to invest – it is one of the best places to live, play and raise a family.”

The cities mayor echoed the sentiments of her colleague from the county. Clayton adds that the event and panel also gave the Northwest Alberta leaders the opportunities to have the discussion with business leaders about the continued investment in the region.

“For multiple years we talked about the economic engine of this province being in this region, and as investment decisions are made we need to be in the forefront of industries mind where future should take place,” Clayton says.

Alberta Minister of Energy Peter Guthrie was also in attendance at the event in Calgary. This is would be Guthries’ first event with industry member since being sworn into Cabinet at the beginning of the week.