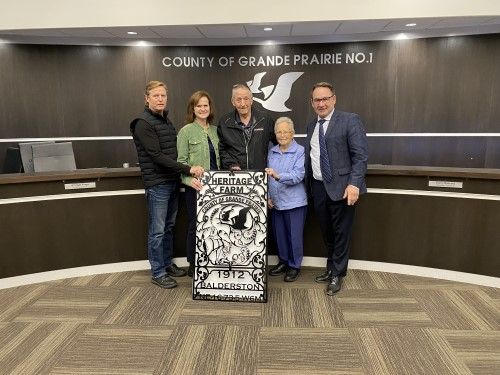 The County of Grande Prairie’s Agricultural Services Board has awarded the Balderston family the 100 Years of Farming Heritage Homestead Award. Ward 2 Councillor Kurt Balderston, along with his family, received the award for the farm’s long-standing contributions to agriculture and the county’s heritage.

Balderston says that it is exciting to receive the award, not for himself, but for his grandfather who arrived on the Edson Trail after emigrating to Canada. He says that it recognizes all the years that his ancestors, his grandfather, uncles, and dad put in to allow him and his family to farm.

“It has been 110 years now in the family, and my son is going to farm now, so it will hopefully be many more years,” Balderston says. “The older I get the more that history means to me.”

Balderston is a fourth-generation farmer, with his great grandfather Edward Morgan establishing the family farm in 1912, his grandfather Gordan Morgan farming between the 1950s and 1970s, and his father Gilbert Balderston operating the farm the years leading up to the county councillor taking the reins.

Since being established in 1912 the farm has seen a bit of change. It has gone from a quarter section to a section, and now has 1,200 acres under cultivation. However, one of the biggest changes that have been seen is the advancement in farming technology. Balderston says that he thinks if his great-grandfather, who was working the field by hand, could see the technology nowadays he would be blown away.

For the farm to run everyone in the family pitches in. Balderston’s son Cody is in his second year of farming and will be the fifth generation on the land, his daughters help take care of the animals and helping out on the farm, and his wife takes care of them all. However, he says that it is not just the immediate family members that help out, but the extended farming community as well.

“I think the farming community is really unique where everyone pulls together, there is such an extended family that we have, and everyone plays a role.”

He adds that it is not just the names that get mentioned, but there are friends and neighbors that are always part of the equation as well.